Alicia on her birthday, by the shores of the Great Western Sea, Chinook, WA

One of the important questions about understanding the impact of social structure and empathy is to also understand what kinds of leaders do the various social structures require.  There’s been a ton of research on leadership — but I have yet to see where it has been put into context that considers how a company is set up, and what channels of information are available to employees in the company.

Of particular interest to me has always been Jim Collins, and his famous book Good to Great: Why Some Companies Make the Leap.. and Others Don’t.  In the book, Jim dwells extensively on what’s called Level 5 Leadership — more commonly known as Servant Leadership, which is characterized by humility and a strong sense of inner purpose.  The inner purpose is usually embodied in the Hedgehog Principle, which is characterized by an overlap of three concepts:  what you are passionate about; what you can be the best in the world at; and what drives your economic engine.

Of interest as well are the other four levels.  Is there a pattern in Collins’ work that maps to the Spiral, and empathetic development?  The graph below by Collins lays out the basics. 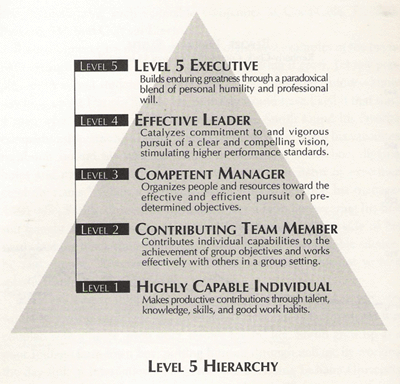 The answer is: well, not really.  And this should not be surprising.  It’s not that Collins’ categories were arbitrarily selected.  They were grouped, as is typical from most of these types of studies, from large data sets (I think that Collins had ~1430, and for the book he selected 11 particular companies).  If they were like the vast majority of companies, they were likely bunched around the Authoritarian/Legalistic <-> Performance/Communitarian transition, with companies bundling the various v-Memes in different ways, dependent as much as who was the boss, as well as cultural/Principle of Reinforcement conditions from the outside.

As well, it’s no surprise that out of the 1400 firms that Collins and his researchers surveyed, only 11 made the grade of having someone at the top that was a servant leader.  Servant leadership DOES map well to the Coral/Bodhisattva level that’s off the standard Spiral Dynamics chart.  If we remember what the classical Hindu definition of a bodhisattva, it’s someone who stayed behind from ascending to Nirvana to help the rest of us more flawed individuals get there.  Seems pretty well coupled with the ideas of intense humility and a strong, integral will that sets the example for others to succeed.

Collins defines, over and again, this kind of leadership as a property of the ‘Exceptional Individual’.  Yet we know from all the previous stuff I’ve written, that exceptional individuals are at some level created by the social/relational systems they are placed in.  At some level, this is a pipe dream, but my hope for all our organizations is that we create systems where Servant Leadership is naturally emergent.  It may still be uncommon — it will still require a commitment from the individual.  But it is accelerated by the social/relational systems present in the organization.

This is not as trivial as it sounds.  One thing that would most definitely be required is some movement past the Trust Boundary — the line dividing the predominant Externally Defined/Independently Generated relational modes, where rational empathy comes into play, and emotional empathy is downloaded into the core of the organization.

Why is it not trivial?  Consider the following circumstance.  Let’s say we have an organization that is fundamentally Authoritarian/Egocentric.  Leaders, for the most part, are governed by the need for Power and Control — not performance.  They control the veracity of the information stream — if they don’t like it, it must not be true.  And they are impulsive and belief-based:  “that’s the way we’ve always done it around here.  And things have been JUST FINE.”  No one would listen to them if they didn’t have a given title.

You are in a meeting with your supervisor, with an employee on your team.  Let’s call him ‘John’.  Your boss, whom we’ll call Big Boss, says “Who’s responsible for the success of this project?”  As a good servant leader, demonstrating your sense of humility, as well as your belief in facilitating people, you say “John.”

What happens next?  What do the people — Big Boss, and John, think, inside this organization?

Big Boss likely thinks “Well, if John is the one that is doing the work, maybe I should get rid of this guy in the middle and promote John.”

It becomes pretty clear that in environments without trust, any person with the empathetic development to become a servant leader — already extremely high on the Spiral scale, and a low probability individual in the population at large — will not get ahead.  The servant leader candidate, counting on empathetic connection, trust, change, and data-driven decision making, can’t last.  The Principle of Reinforcement says that the social structure will maintain itself, in this case through fragmentation of social bonds.  In fact, the servant leader candidate will be lucky if they don’t get fired.