Braden, outside the Donnerskirchen Train Stop in the Burgenland, Austria, 2012

Lots of people ask me what a v-Meme, or Value Meme is — it’s the most asked question.  I thought I’d lay out a modestly simple response to the topic.

The first thing to understand is what a Meme is.  A Meme is a recurring thought pattern, or piece of information, that is passed between individuals in a community.  My fancy way of saying it would be ‘information spread organically between sentient actors in some defined community or culture.’  Much like a gene, memes can be spread horizontally or through some kind of inheritance.  Think about the memes that define your family story — everyone knows them, and they are repeated ad nauseum at Christmas.  You tell your mom you don’t want to hear that story, she doesn’t care.  It gets repeated.

A Value Meme, or v-Meme for short, is subset of memes with some interesting properties.  The term was coined by Don Beck and Christopher Cowan.    Some think of them as orienting platforms of thought for people and societies.  That’s not too bad, but what does it mean?  I like to define v-Memes as self-similar repeatable and transferable patterns of thought that govern how information is shared in a given social/relational system.  They are more than just an ordinary hunk of information, like ‘An apple a day keeps the doctor away.’  They are meta-informational structures, that also structure how all topical information is transferred in a culture.  These meta-informational structures talk about how societies will set the stage to talk about a variety of issues, as well as how individuals will talk about them amongst each other.  And via Conway’s Law, they are mirrored in the social structures of the societies that produce them.

Let’s unpack this a little.  When I say ‘self-similar’, in this case what I mean is that the society will use this method of transfer of information, as well as an individual.  One of the v-Memes with the most descriptive names is the Authoritarian v-Meme.  Everyone has an idea of what an Authoritarian is, and immediately one word that might come to mind is ‘bossy’.  But can a society be ‘bossy’?  A better way of describing the Authoritarian v-Meme becomes ‘an interest in power and control.’  Being bossy might be a strategy for Authoritarian behavior and gaining power and control.  But not every person who’s an Authoritarian is going to be bossy.  In fact, most Authoritarian systems use far more sophisticated techniques that just yelling to get you to do what they want you to do.

Likewise, the emphasis on self-similarity means that it has to be reflective of both societal behavior, or the big picture, as well as individual acts.  ‘Power and Control’ would perfectly characterize, for example, East German culture before the Berlin Wall came down.  Yet the method of control that was actually used was that Stasi, the feared East German security apparatus, used everyone ratting everyone out to maintain control.  Once again, information flows and controls are better ways of characterizing both individual actions (in this case, no one would talk to anyone because they never knew who would betray them — a perfect, fragmented Authoritarian structure) and societal actions (setting up an apparatus that would perpetrate relational disruption to maintain the fragmentation necessary for its continuity.)

Hopefully, this is a start on understanding v-Memes.  I’ve put up my four slides that describe the characteristics of ‘The Big Four’ Spiral levels:  Authoritarian, Legalistic, Performance-based, and Communitarian.  The rest of the blog is devoted to discussing how all this stuff works.  It’s all interconnected, so if you’re expecting an easy answer, you’re going to be disappointed.  But once you figure it out — well, it’s the story of all of us.  Including your dog.  And that monkey in Papua New Guinea.  Which is the point. 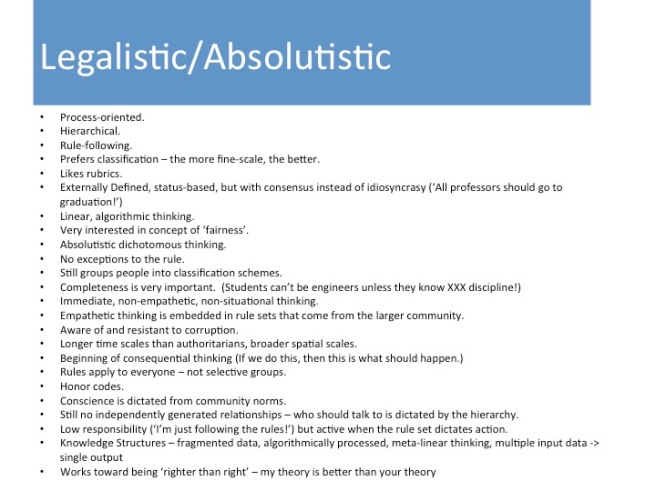 Takeaways:  V-Memes are patterns of thought arising from fundamental empathetic dynamics of a given social structure that govern behavior, reflected in both society and individual actions.  Beware simplistic v-Memes, like ‘Communitarians are nice,’ or ‘Authoritarians are jerks.’  They don’t shed light on how information is transferred in the social structure.  And that’s the core of how v-Memes operate.