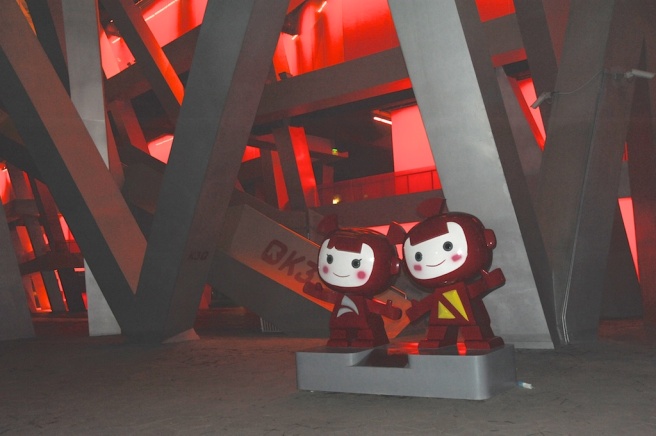 One of the points Don Beck, one of the primary innovators of Spiral Dynamics has made (so frustrating that I can’t reference this correctly!!!) is that leaders of organizations can be at a given v-Meme level, or one above.  This kind of makes sense — a leader at a level above pushes evolution of the dominant v-Memes his or her group possesses, and helps them along their way.

All this sounds fine.  And if you go back and read about my various posts on v-Meme conflict, it makes sense.  There’s no guaranteed conflict between folks only one step on the Spiral apart.  So, in an Authoritarian society, a Legalist could be the leader, and help the Authoritarians evolve up a step to realize that a system that didn’t just depend on the judgment and favor of the Top Dog, but instead,a scaffolded system of laws guaranteeing everyone’s rights.  They would also be forfeiting their privilege in the process, in getting others to evolve.  Confucius’ edict, ‘A good emperor doesn’t kill his own people,’ definitely falls into that category.  By removing the Emperor’s authority over life and death of his subjects, and hopefully subjecting such decisions to a process, the society evolves up a notch.

But how did Don Beck conceive of this, and how do I think that would make me believe this is a reasonable notion?  And what does this have to do with Servant Leadership 2.0?

Thinking about this led me to this seemingly simply edict about this fundamental meta-property of leaders.  Evolutionary leaders help their people evolve, on average, up the Spiral.  It applies no matter what level you’re at.  So, in a Tribal/Magical society, an evolutionary leader would be someone who would move a loose grouping of tribes into an Authoritarian system.  Genghis Khan would be a great example.  Not surprisingly, he did this with incredible, pathological violence in the process — but he also establish the beginnings of an empire that provided stability — and established the contiguous nature of the Silk Road, which led to permanent ties between East and West.  Talk about an empathetic ladder, from one of the most violent tyrants in history!

It doesn’t stop there.  One of the points I make in a paper I’ve written about evolutionary entrepreneurship is that entrepreneurs at one v-Meme level typically leave a lasting legacy at the level one up.  Authoritarians like James Buchanan Duke, and Andrew Carnegie left behind the Legalistic institutions of Duke University, and Carnegie-Mellon University.

So this seems to make sense on the surface.  But what’s really going on?

One of the things that hit me with my own epiphany is that as an American, I have been inculcated with the cultural attitude that things are always getting better.  If we’re Legalistic/Performance-based in ‘Murica, then we must be moving on up into Performance-based/Communitarian.  And we should attempt to influence those around us, if we are leaders, in the ostensible values that go along with a more Communitarian society.  All that sounds good, and it may be true.  But it puts a fundamental gap in our thinking.  What if we’re not getting so much better all the time?  What if we’re actually going downhill?

But what does THAT mean?  What does empathetic development, which follows the Spiral, tell us?  As we move up the Spiral, we evolve the ability to have more, and more complex relationships with more people.  So that means implicitly that a leader at a level above his or her society, will be creating an environment where people can be having more, and more complex relationships with people around them.

The recent legalization of gay marriage is an excellent example of a Legalistic v-Meme evolution in American society.  There was a widespread recognition that gay couples were given the agency to a.) define their sexual orientation, and b.) receive the rights, responsibilities and protection of the state for their choices in a single-partner situation.

This led to my development of a fundamental Evolutionary Empathetic Principle of Leadership:  a leader who is Evolutionary and Empathetic will work in the context of their community to help grow more healthy, appropriate, diversified and differentiated relationships among members in that community.  And someone who practices Servant Leadership 2.0 will do so in a self-aware fashion — that they recognize why they’re doing it, and will have some idea what the outcome will be before they start.  Servant Leadership 2.0 demands self-aware relational diversification.

The nice thing about this is it allows relatively easy benchmarking and reflection for the leader.  In the process of simplifying the org chart of your organization, for example, are you simultaneously allowing more opportunities for people to create their own relationships?  If so, you are likely Evolutionary and Empathetic.  If not — then what exactly are you doing?  And why are you doing it?  There are, as always, no set answers.

Was Genghis Khan a Servant Leader 2.0?  Likely not.  Though he created an empire that had many benefits, he did it in a decidedly anti-empathetic way. What was his level of self-awareness?  Once again, not clear.  I try not to moralize, but needless to say, I never consider genocide as a sign of enlightenment.

That then leads to the next question:  if an Evolutionary Empathic Leader is mainly characterized by relational diversification, what is a Devolutionary, Non/Anti-Empathetic leader going to do?  If we apply Beck’s maxim, it would imply that such a leader would be AT or BELOW the level of the general population.  And instead of diversifying relationships in their community, they would be relational simplifiers.

How does one simplify relationships?  The only way I can think of is through disruption.  So, that means that leaders at, or below the dominant social organizing principles of their constituency, are relational disrupters.

And the more common term for such people are empathy disordered — or, to simplify a little bit myself,  psychopaths.  And how they work, as we will discuss, is a fascinating pathology, as well as a not-so-merry chase.

Takeaways:  One of the fundamental principles undergirding Evolutionary, Empathetic Leadership is attempting to create more appropriate and diverse relationships in the organization or society one is responsible for leading.  Servant Leadership 2.0 demands that you are aware of what you are doing, and are attempting, as best as you can to create an environment where more people can connect.

Further Reading:  There’s a lot to unpack with that final statement, and we’ll be getting to that a little later.  But you can get a head start by reading Bill Eddy’s Blog on High Conflict Personalities.