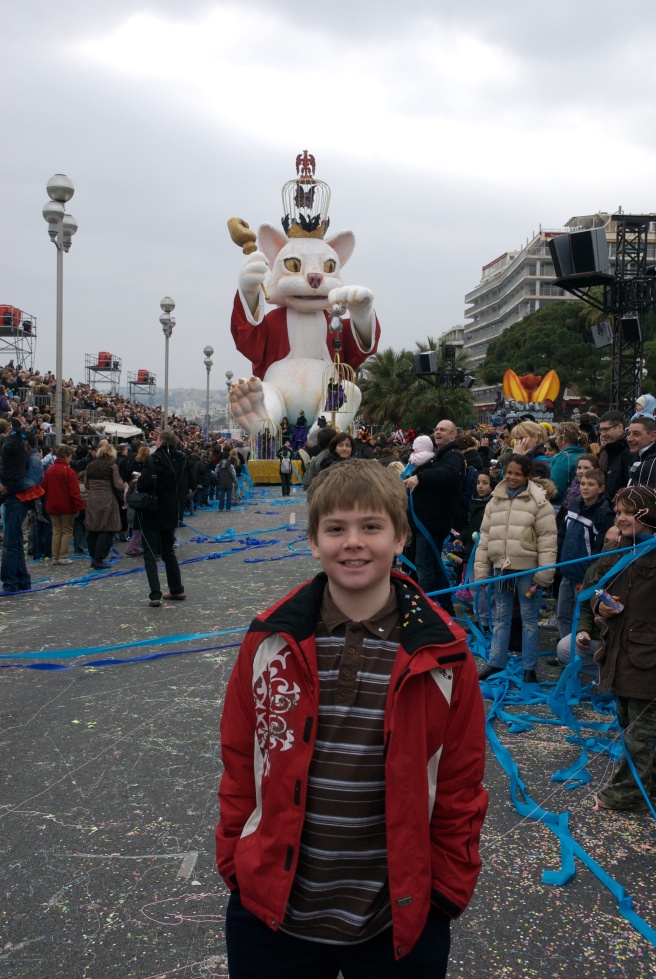 Braden with the Roi (King) of the Nice Carnival Parade, 2008, Nice, France

Let’s get this straight.  Philosophers who are far more sophisticated than me, as well as neuroscientists and a list of other professions, have been working on the problem of how people think for as long as humans have been on the planet.  But we need a model so we can move forward in our understanding of knowledge in social networks.  And that’s what we’re talking about today — a model, simple enough to be useful.

Since I like Ken Wilber, let’s start with his stuff — the idea that we can split individual human thought into a fundamental dichotomy — belief, and reason.  This is a useful division.  There’s only two categories (handy!), and it also maps to some basics in brain function, a la Daniel Kahneman and his book Thinking Fast and Slow.  Belief is associated with the impulsive, compacted, downloaded part of the brain otherwise known as the limbic system.  And reason ostensibly sits in the pre-frontal cortex — that big hunk of sophisticated gray matter that supposedly separates us from the lower beasts.  Maybe!

Here’s a little slide from a PowerPoint I give to help lay it out. 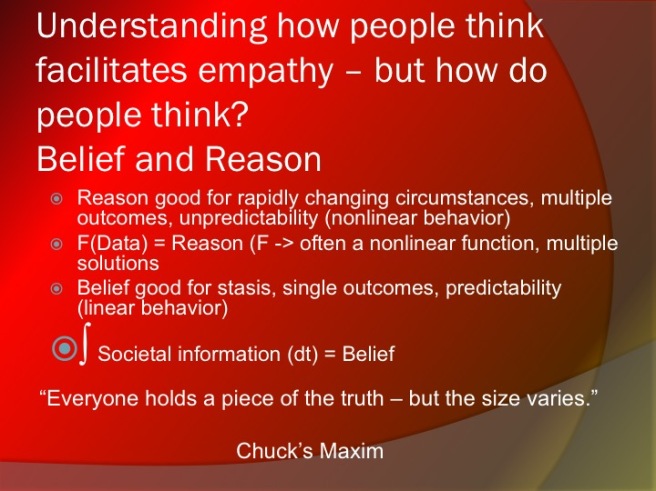 We’ve made the case in the past that reason, when coupled with interactions with other people, comes along with a developed rational empathy, and that it involves taking data from a given circumstance and processing it in a complex way to come up with a conclusion.  We’ve been using math paradigms in the past, and we’ll use one now — your brain takes the data and does a functional transformation that allows you to reach a conclusion.  It may take a little while, brain-wise — this is Kahneman’s slow thinking after all.  But it knocks around in your frontal lobes, and at some point, your brain reaches a conclusion.  Depending on your development, you’ve applied an algorithm, or a heuristic, or some combination of heuristics.  As people say about relationships sometimes, “it’s complicated.”

Contrast that to belief.  Belief is something that has been processed, either by you, or more likely, larger society.  That aggregation has been in the past, and boiled down to one thing or another.  It is not as dependent on the current situation, though the current situation could trigger emergence of the belief.

In mathematics, you could represent belief as an Direct Integral Function.  What’s that?  Basically, that’s a long sum of information, all added up and normalized in some way or another, where the more complex nature of the information is averaged out.  You can’t know exactly how a belief came into being, because while there may be some obvious factors, there are also some less obvious factors involved whose independent detail have been lost in that averaging process.  Just like a single number — an average, for example — doesn’t tell you about the shape of the probability distribution that the average represents, a belief can’t really tell you about all the data that went into it.

And that’s important — because when someone tells you “well, the reason for the belief is…” you know they’re full of it.  Belief, as some meta-integral of a complex of data, can’t be explained solely through reason.  There’s other stuff buried in there.

That doesn’t mean that beliefs aren’t good things.  One of my favorite examples is asking people what they do when they cross the street.  Inevitably, they say “look both ways.”  That’s been pounded into their head by mother and father since they were four.  I’ll then ask them “well, what if it’s a one-way street?”

Why do we look both ways?  And why is this particular belief useful?  It arms us with a short-time, semi-automatic response that keeps us from getting run over.  Imagine if we took a more rational approach toward cross the street.  We’d approach the street, evaluate whether the street was one-way or two-way, and then make a decision to collect data.  We might consider the speed limit, and road condition.  Then we’d have to sit down and scratch our head.  By the time we finally got across the street, we’d be late for our meeting.  Or we might get hit by a car.

Belief is also interesting in that it’s fundamentally binary in nature.  Either you believe something, or you don’t.  It should be no surprise that belief maps to the lower levels of the Spiral as the dominant mode of thinking.  As an Authoritarian, you either believe something or you don’t, depending on who they are and their status.  Legalistic v-Meme right/wrong corresponds to the concepts of rules as well — you either violate them or keep them.  No questions asked.

Reason becomes a more complex beast.  Reason at its beginnings starts in the Legalistic v-Meme, with logical processes that require data particular to a situation.  Decision logic comes into play — if/then lets us separate different cases, and handle a wider variety of situations.  As we introduce more variability due to independent agency, we get a broader, probabilistic flavor to our reasoning, and we start to see the emergence of heuristics.  It just gets more complex from there.

We can, however, with a little help from our friend, Ken Wilber, place this into a system of evolving thought.  That structure is in the Powerpoint Slide below: 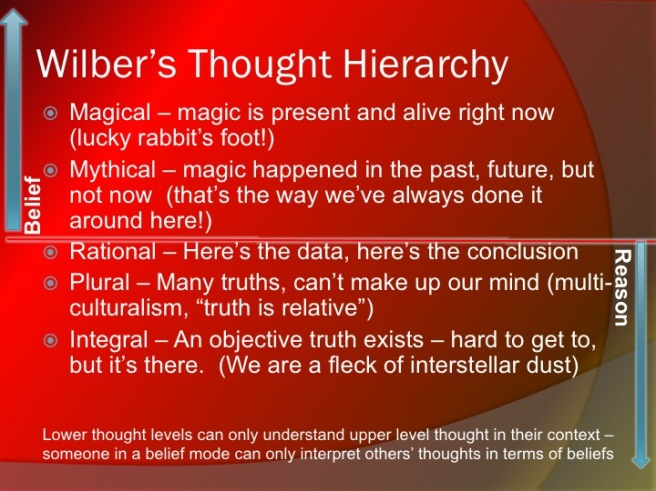 One can see a rough mapping easily between these levels and the Spiral.  Magical maps to Tribal/Magical v-Meme organization (in terms of time scales, we get short-time/long-time dynamics).  Mythical certainly mixes in there, as well as moving on up into belief-based Authoritarianism.  In our own society, we see a lot of Mythical thinking around the United States Constitution, as an example.  But that’s not the only place.  Most faculty are largely Mythical/Rational.  Ask any university prof why they teach a particular class a certain way, they’ll be quick to tell you that it’s the way their graduate advisor did it.  Graduate school — now THAT was a mythical time!

Rational thinking — people like the idea of rationality, and to be sure, it’s a data driven ladder to better things.  But few people consider the downsides of rationality — it’s dependence on how good the data actually is.  You can use a rational-algorithmic, or rational-heuristic process.  But it’s Garbage In/Garbage Out — your decision is only going to be as good as both the process AND the data.

Multiple perspectives/Plural thinking map well to Communitarianism — everyone has an opinion, and everyone should be included in part of the process.  Until the process just doesn’t work any more.  So it’s not perfect, either.  One can start seeing that there are some fundamental information theoretic/thermodynamic balances at work between belief and reason.  If you don’t have enough time, space and energetics in your data or in your beliefs, no matter where you are in Wilber’s hierarchy, you’re not going to make good decisions.

Last up is Integral Thought — the idea that you can reach the truth, but it is hard, and it takes a long time.  Here’s an insight into this — why Servant Leadership 2.0, or advanced design practice all offer pathways to Integral Thought.  You have to be self-reflective, and consider your own bias — especially confirmation bias.  You can’t get to an objective truth until you can see how you’re part of the larger system that generates it.  And if you’re a big part of it, Heisenberg’s Uncertainty Principle rears its head — the very act of observing and potentially interacting changes the truth itself.  As a manager, it’s something to remember.

The last part of understanding belief and reason, as well as their structure in Wilber’s Thought Hierarchy, is understanding who can understand what.  Someone operating lower on the hierarchy simply can’t understand thoughts constructed higher on the hierarchy.  What is the implication of this?  Let’s say you’re arguing with someone who is a Bible Literalist — that means that they view every sentence in the Bible as an absolute truth.  You approach an argument with that person that you’re going to change their mind.  You present data, what you feel is proof that the Bible has been translated from the original Hebrew.  They don’t buy it.  You try, and try, dredging up information, photos and such.  They won’t budge.  Why?

This is a classic example of clash of levels on the Thought Hierarchy.  The Bible Literalist is likely operating from at a maximum a Mythical framework, and they may even believe in a Magical perspective, where they believe the Bible issues exact dates for various events, such as the Apocalypse.  What is important is to understand how they view your argument.  The short answer is that it is only a representation of your belief — that the only objective truth, in their mind, is that you can only argue FOR your beliefs.  How about that for an Authoritarian/Egocentric v-Meme mapping?

The same principle operates up the Hierarchy.  Someone who is a Plural thinker is going to have problems with an Integral thinker — you don’t get out of the frame until you become self-aware.  So, if the person who you’re arguing with isn’t, you’re stuck.  Or maybe you’re stuck.

It’s not hard to take Wilber’s Thought Hierarchy and map this back to the whole series on differential v-Meme conflict that I wrote here.  People at different v-Meme levels not only do not have the same structure and synergy in their knowledge levels.  They literally are not using the same parts of their brain to communicate with each other.  And at the lower levels, their ability to connect and trust are also radically diminished  — so they have absolutely no reason to listen to anyone else that doesn’t match their thoughts.  The necessary neural patterning is just not there.

One of the interesting things I’ve noticed as a teacher is that a majority of young people have a leg up in this situation because of their inherent neural plasticity.  If they’ve been properly prepared, they literally can wrap their heads around thoughts (through a combination of mirroring behavior and general receptivity) that older people will struggle with.  And more importantly, if they’ve been patterned successfully with a variety of complex algorithmic thinking processes, even though they core-dump specific knowledge after any given test, they can rapidly re-assimilate it if needed.  One of the things about students receiving a B.S. in engineering, which emphasizes complexity and sophistication of algorithmic thought compared to a more skill-based degree, is that they have this capacity.  Many a plant manager has told me “I never expect them to know anything.  But they are just different, and pick things up faster.”  I’d argue that this isn’t just a result of sorting out ‘smarter’ kids with advanced degrees.  It’s actually a function of Wilber’s Thought Hierarchy in action — and the incumbent linkage to more sophisticated social structures that students are required to have.

Takeaways:  Pay attention to the arguments people use, and you can usually pretty quickly figure out if they are working on principles of belief or reason.  But pay attention to the way you think as well.  Getting to truth is hard for any one person — and it’s likely if you want to develop a real Integral perspective, you’re going to have to work on your empathy as well.  It’s a never-ending process.