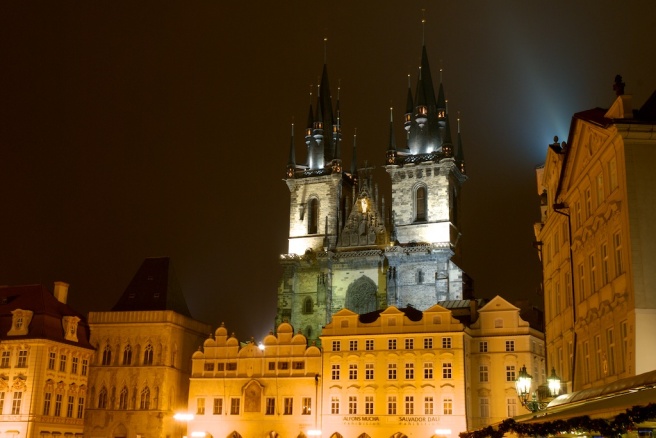 Moravian Glory — Prague, from the Central Plaza, at night, January 2008

One of my favorite subjects to discuss at the university is the fundamental structural problems inherent in universities training designers of the future.  Besides the obvious ‘customer/empathetic’ problems — listening actively to people of different status than them –there are issues that run far deeper.  One makes one’s reputation at the university through in-depth exploration of a particular topic (actually expanding sophistication and complexity,) which almost always entails developing algorithmic expertise in refined models of a particular phenomenon.  My advisor, whom I revere — so don’t get the wrong idea– was a specialist in the field of aeroelasticity –how flexible things flutter in the wind.  He spent his entire career on this, applying various mathematical and computer models, occasionally branching out into turbulence and chaos theory to explain the relatively unpredictable results.  For his creativity and diligence, he was inducted into the National Academy of Engineering.  So don’t think that there wasn’t some higher wisdom in pursuing this track.

But the world is changing.  The problems facing the world require a greater synergy — and the problems, as they arise, are being met from all different sides, in all different venues.  Universities are trying to catch up in the synergy game, but are fundamentally hamstrung by their anachronistic social structures, as well as decreased funding.  Real change requires energetics as well as structural modification.  And neither seem to be evident in the new economy.

One new area requiring design synergies is the Internet of Things (IoT).  A term coined in 1999 by British entrepreneur, Kevin Ashton, it means things that do stuff hooked to the Internet that exchange data, and therefore control actions between them and some other intelligence.  Obviously, reliable WiFi has accelerated the whole IoT concept, as well as the collapsing cost of sensors and actuators.  Any minimal IoT system has to have some electro-mechanical component that interacts with the outside world, a sensor to take data on its condition and an actuator that takes the computed world change and does something to change the behavior of the electro-mechanical system, and an Internet hook-up, where data can be sent to The Cloud, to be analyzed and acted upon.  Think an automated smart thermostat that averages temperatures and desires, and then sets the perfect temperature inside your house when you walk through the door and say “Honey, I’m home!”

There are lots of obvious examples that one could generate with the built environment.  And the futuristic ideal involves you walking into that environment, waving your hands and babbling something about your wants and needs and being satisfied.  I think the book/movie Solaris gets to the nexus of what the Internet of Things could be — an extraterrestrial intelligence that projects elements out of our own memory to question our desires.

That may be a long way off, but it’s becoming increasingly obvious that our university education isn’t preparing any of our young engineers to get close to designing anything within the IoT space.  The idea behind multidisciplinarity is that any given project, with all its different components, will have a member from every required discipline who will then in turn be responsible for each individual part.  Conway’s Law says that’s an absolute minimum required.  Do note how there’s little redundancy planned for.  Each discipline has a bare minimum training in anything other than core specializations.

But that isn’t going to cut it.  There’s no way you can have such a system with such clear boundaries.  There will be instead fuzzy boundaries, and areas of overlap.  The idea that you can also just add a class, or a new silo to the already bloated core curricula of all the engineering studies is just nuts.  If engineering knowledge turns over every six years, the idea of having a degree program longer than five starts to stretch credulity, as well as the imagination.  Sooner or later, we need to realize we can’t just train ourselves out of this box.  It’s time to stop beating up our young people with our own lack of appreciation for empathetic understanding.

What happens if we proceed without the answer you know is coming — empathetic development?  Sharply divided disciplinary development environments are likely to create failed projects — especially with younger engineers.  I know this, because I’ve watched it happen.  What occurs is that tasks are divided in a very rigid fashion, with all people only assuming their externally defined responsibility.  EEs are responsible for the electrical engineering part, MEs for the mechanicals, and so on.  No one makes much effort to master the different disciplines other than their own, as they are defined by their title.  Then, when one part doesn’t work, the finger-pointing starts.  “It’s an electrical problem — so the EE is the one who has to fix it.”  Little investment leads to little connection to other team-mates, and then inherently low responsibility behavior and low agency.

What’s the answer?  Of course, it’s a more pronounced rational empathy, where team-mates have active interchange so they can understand the challenges faced by other teammates attempting to solve complex problems.  This creates as well a diversity of problem-solving approaches, as other teammates start cross-fertilizing the idea pool.  Couple that with the parsing of trust — having a deeper historical record of whether teammates have successfully faced, and surmounted similar challenges in the past — and one can see that the real crux of developing IoT is balancing the reliability scaffolding in the individual disciplines with the validity demands of IoT — these things have to work in an integrated fashion in the Real World.

None of it is simple, and a larger set of experiments, as well as experiential learning, will be required to find some set of optimal paths.  All of this is going to occur in a sea of evolving technology, against a backdrop of drop-in modularization of all the various disciplines and their parts.  It’s not inconceivable that there will be a drop-on-top icon of an app that basically provides complete Internet functionality that someone might put in their Labview control system.

But understanding the different functionalities, and the paradigms represented by the disciplines, is not going away any time soon.  And innovation environments are still going to require that one person, or group of people, with a great idea, to find other can-do partners that can make the system work.  And those relationship skills are still going to involved developed empathy.