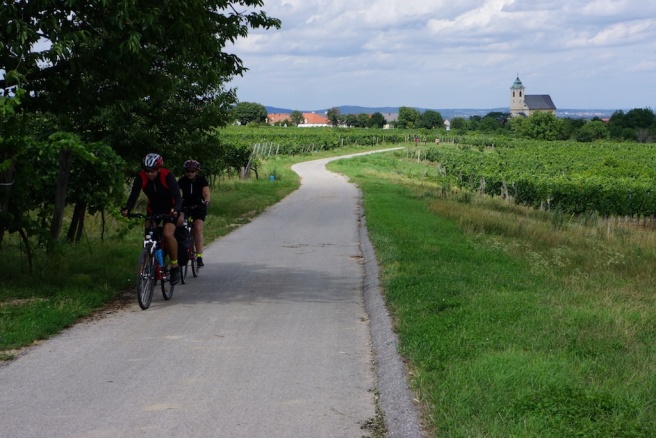 Cycling along the Neusiedlersee, in the Burgenland, Austria

One of the topics often thrown around when talking about creativity is the idea of chaos leading to diversity of thought.  So much that a fair amount of people have suggested that nonlinear dynamics that create chaos are directly applicable to social dynamics.  As someone who’s got the bona-fides — I did my Ph.D. research on characterizing chaotic motion, sometimes it seems like it’s verbiage that might have some tie to chaos theory.  And to be fair, people use the term ‘chaos’ in different ways — mostly to distinguish from truly random behavior.  This is a summative article from a blog post on Scientific American that walks through some of the latest thinking.

But it turns out the the allusions are right — and the answer in how to understand how this is true is, not surprisingly, tied to empathy.  But we’ll have to discuss a little background in the math-world-without-math.

In understanding system dynamics, there are two kinds of systems.  We’ll talk about them below.

Linear systems work in a way we can easily predict.  The basics are this:  You put an input into a linear system.  The output that’s hooked to the input responds to the input a little bit — actually a proportional amount, in a predictable way.

Here’s an example.  Consider the temperature dial on one of your stove burners.  You give the dial a bit of a twist, from ‘1’ to ‘2’.  The stove top gets PROPORTIONALLY hotter.  It may take a little time for the burner to heat up, but once it does, you can guess pretty easily how much hotter it’s gotten — or how much more quickly your food is going to cook.

And that’s it — linear systems can be completely characterized by two things — what’s called a gain — which is proportional constant between the input (in this case, the stove dial) and the output (the burner temperature) and the phase lag, which is what systems folks call the amount of time for the output to roughly follow the input.  Very predictable.  If you wiggle the dial around, with some appropriate lag, the system will follow the wiggles.

It turns out that linear systems behavior also corresponds to the bottom two levels of the empathy pyramid.  Mirroring behavior can be mapped to a gain of 1 (the mimicking action directly maps — think ‘I yawn, you yawn’) with a phase lag (a person needs to see someone yawning, and it takes about a second — the phase lag — but then they yawn.)

Emotional empathy is a little more complicated, but it still falls into what systems theorists would call a linear behavior.  Imagine you hear an infant crying — maybe it’s your kid.  Hopefully, you pick the baby up and start to soothe it.  As long as the Big Three are taken care of (food, sleep, and poop) the baby will stop crying after a couple of minutes.  Sobs turn into sniffles, and sniffles usually turn into sleep.  Any parent worth their salt know that if it doesn’t stop, something else is wrong.

What’s going on with this system is what a systems theorist would call exponential decay.  The baby is crying, you interact, and after a certain amount of time, the response to the stimulus (crying, soothing) asymptotically approaches zero (the baby stops crying).  This is also the hallmark of what a systems theorist would call a First Order Linear System.  Believe it or not, lots of phenomena in the world fit into the category of a first order linear system.  Water draining out of a tub is one.  Heating up a room is another.  And emotional empathy is a third.

But now things start to become more complicated and unpredictable.

Nonlinear systems are the larger class of systems that basically encompass all phenomena we deal with in the world.  Now hang with me here.  Linear systems, just like those matryoshka dolls, are really just a subset of nonlinear systems.  They approximate the behavior of a system for a given range.

Let’s go back to our stove example.  We go to the burner control, and turn up the knob to 1.  The burner gets hotter.  Same for 2, 3, and on up to 10.  Each time we turn the knob up a bit, we get a calibrated, proportional response to the input.  But what happens when we get to 10?  The knob won’t turn any further.  And even if it could, the burner might be limited by a circuit in the stove. It could only get so hot. No longer would we see the predictable, proportional response that we are expecting.

Instead, we would see what we would call nonlinear behavior.  I’m going to put a list of really simple things you’d see around your home, and the term systems theorists might use to describe them.

And so on.  There are quite a few good books out there that can explain nonlinear theory and give practical examples.  Here’s one.

The popular press likes to rave about how complicated nonlinear theory is — and it can be.  But we’ve evolved in a nonlinear world, and our brains are actually quite adept at nonlinear estimation.  The big thing to remember is that the response of a given system to an input is proportional, up to a point — and then something changes.  As a kid, you’ve crawled out on that branch just to the point where you thought it might break, and then stopped.  That’s nonlinear system estimation.

How does this relate to empathy?  Moving up the next level on the empathy pyramid, we encounter rational empathy.  Rational empathy is place-taking empathy — where we each have some opinion or idea, and through a process of exchange, including attempts at shared coherence, we can either a.) change the person’s mind we’re talking to, b.) keep our own opinion about what’s going on, or c.) build a new concept or concepts through shared exploration.

It turns out that we can model this with a Second Order Nonlinear Differential Equation — one in particular, called a Duffing equation with negative linear stiffness.  Oddly enough, this is the equation I beat to death for my Ph.D. In case you’re curious, I’ve done quite a bit of confirmation bias soul-searching along the lines of how this equation works from over thirty years.  But it’s not just familiarity.  It turns out that the Duffing system maps very well to the rational place-taking problem.

Consider two people working over a design idea.  They both have their opinion on what the solution it is.  We could graph the way this works by representing it as a two-well potential problem.  See the figure below. 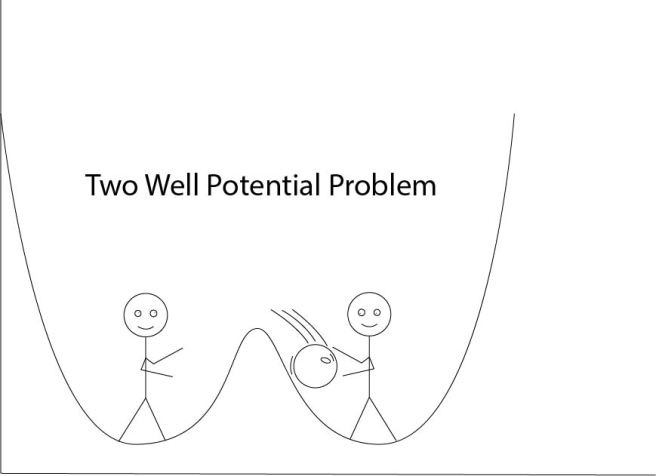 Let’s represent their moving shared opinion by a ball, rolling down in this system.  When one person speaks, their opinion is represented.  If we add a little emotional energy from both interacting parties, we can see the ball will roll around between the two wells.  As long as they pump energy into the system, dependent on the persuasiveness, or argument of the party, either a.) the ball will settle down into one of the two wells of opinion, or b.) the ball will bounce back and forth between both wells, in the larger super-well.

We can plot these solutions using something systems dynamicists call a phase diagram.  We’re going to have to analogize pretty heavily here — so I want my mathematical colleagues to Roll With It!  A phase diagram for a nonlinear oscillator is typically represented by a plot of velocity vs. position, with time running in the background.  This yields a plot like this:

We can analogize the entire plot as a representation of energetics vs. position/design elements mapping to velocity and position, and come up with some insights from our two-well potential oscillator, and the (a.) and (b.) potential solutions we discussed (and make intuitive sense) above.  Those are shown in the diagrams below: 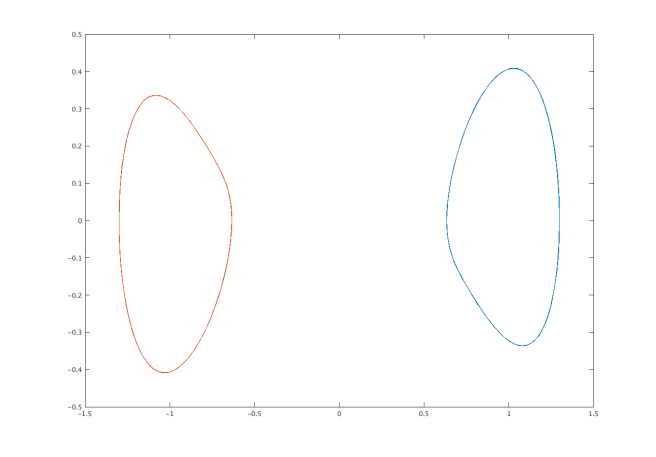 Figure a — limit cycle oscillations around each of the opinion equilibria 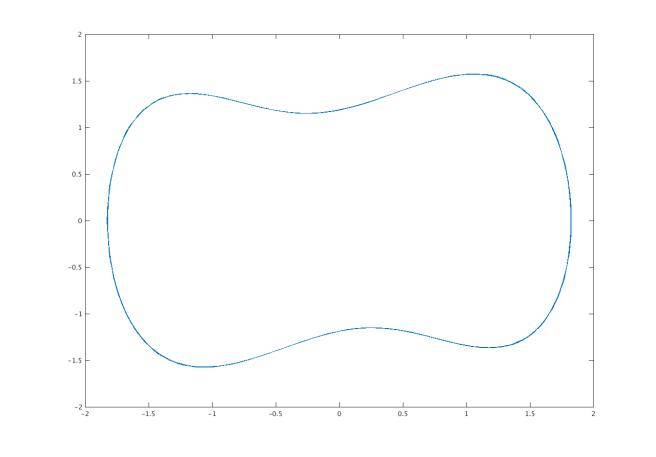 Figure b.  Limit cycle oscillation around both equilibria

Nothing starts out perfectly synchronized.  The time that it takes for two people to settle to a standard, coherent opinion, is represented by what is called a ‘transient trajectory’.  This is the back-and-forth necessary for two people to come to an agreement around a given idea.  This final coherent idea in the phase space is represented by a ‘limit cycle’ — a stable trajectory around a given information space.  The shape of that idea, much like the limit cycle, is dependent on the information characteristics of the space, as well as where one starts the discussion (initial conditions) as well as how much energy is dumped into the system — what’s known as a forcing function.

Here’s a picture of a transient in the process of settling down — note the dark overlap as the opinions/trajectories superimpose on each other. 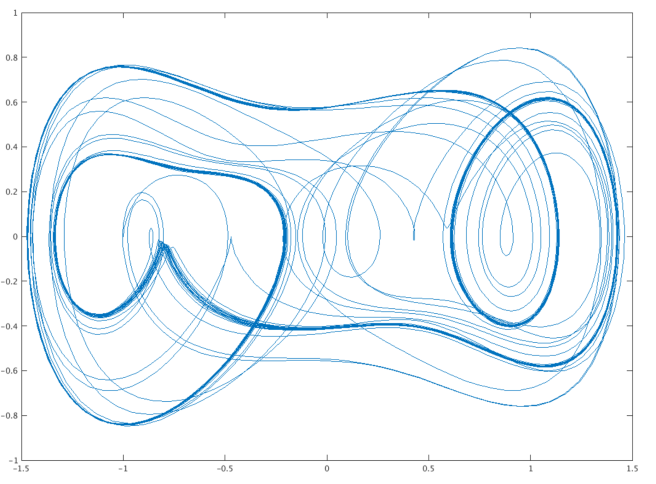 Many interesting phenomena of this system map to the Design Thinking space.  In no particular order, these are: 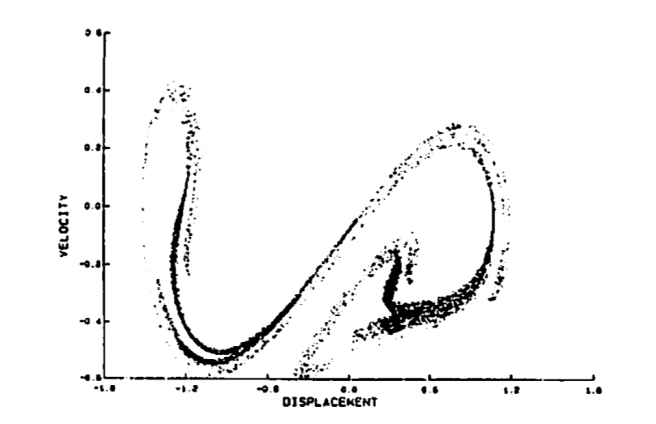 (In case you’re wondering how does one get such a crummy plot, this was made in 1985 on a Tektronix phosphor display, where after plotting, one hit the button on the thermal printer, and out popped a plasticky plot that you could the put on a Xerox machine.)

This is a complex post.  I’m going to work on explaining this better in the future.  But you can see the patterns.  Rational empathy, with its back-and-forth, offers a nonlinear mechanism that unlocks all sorts of potentials for deterministically explaining creativity — even if the process is indeed chaotic.