I had the pleasure to spend the last week with my friend, Dr. Hesam Ostad, who directs a workgroup for a large engineering firm, Ferchau Engineering, in Stuttgart that partners with Mercedes-Benz.  Hesam and I had taught a creativity and innovation summer course in Vienna about four years ago.  In the course of our trip, we visited another one of my collaborators, Dr. Michael Richey, an Associate Fellow in Learning, Training and Development at the Boeing Company.  Mike and I were partners on his innovative program called the Boeing AerosPACE initiative, where professors from a range of institutions collaborate to deliver a coordinated program utilizing both on-line education and practice-oriented, problem-based learning in building a fixed-wing UAV.  Below is a picture taken from the fly-off last spring.

Blaine and Kyle with the plane, Boeing AerosPACE flyoff, April 2016

If you ask Mike what puzzle he’s attempting to crack, he’d be happy to tell you that he’s working to find ways to evolve a hierarchy into what he calls a ‘networked hierarchy’ — which is the challenge he faces immediately at Boeing.  His perspective originates from his own bottom-to-top job evolution, as he started at Boeing making wings some years ago, and then moved up into education.  The AerosPACE program, which involved Boeing employees, as well as professors from WSU, Georgia Tech, Purdue, Tuskegee, BYU and others, had as its stated cornerstone mission in developing virtual work techniques and teaming for students.  But there was another, unstated, and far more complex mission — getting professors from different universities to work together to pull off a synergistic program.  The design process used for the UAV was classic transitional gated design, which allowed the professors opportunities to teach technical information and fulfill class requirements, meeting expectations of rigor at the beginning of the process.  After that, the larger focus was on building the UAV.  And though it was close, at our fly-off, all the UAVs flew!

Hesam and I met Mike at the Everett factory for a tour of the Boeing 777, 787, and old 747 line.  Immediately adjacent loomed the new 777x wing facility, still locked down and hidden from any prying eyes.  We all got to climb up in a 787 ready to ship, and toured the flight deck, which looked more like the interior of a comfortable new car crossed with the command center of a futuristic spaceship than the old-style military fittings, with lines and lines of switches. 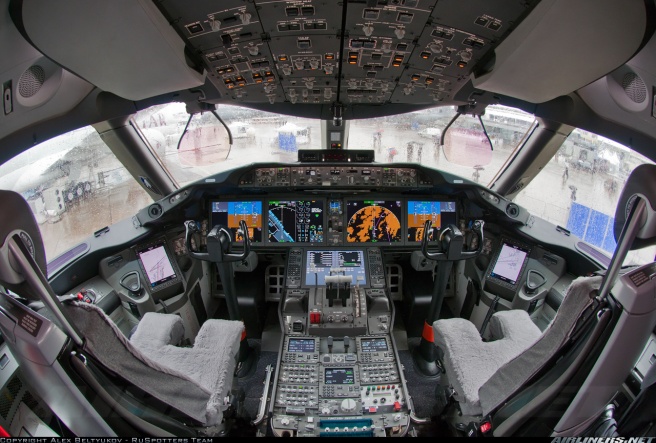 Another view, without the seats — Boeing.com

Mike is one of the pioneers in using Big Data in understanding personalized learning, and he’d be the first to admit that he’s at the beginning of a long journey.  But he’s stepped out and written about it, with other collaborators, on the purpose of educational research and analysis.  If we’re doing all this work, demanding educational researchers do more and more extensive data analysis, to uncover trends in how people learn, how, exactly, is this improving the educational experience?  Mike will tell you that Google uses data real-time to improve performance of the user experience.  Why can’t the educational system do the same thing?

Diligent readers of this blog will already know the answer.  Academic systems, mired deep in the Authoritarian/Legalistic v-Meme, don’t care much about evolving the student experience.  Masters of explicit knowledge acquisition, aggregation, and reproduction, they are going to struggle with the concept of importance of how students actually integrate and process information (they’re supposed to learn the way the professors teach!) which requires higher degrees of rational place-taking empathy. The purpose of most of that data acquisition and research in engineering education is to publish papers in journals — not adapt a Performance v-Meme perspective and attempt to improve what is done.  Further, the Absolutistic strain in academic communities will almost always say that not enough research has been done to draw definitive conclusions, and as such, it’s back to “that’s the way I learned it — it’s good enough.”

This leads to the larger question — how do we effect transformational change inside our lower v-Meme institutions?  As a large, hierarchical institution, Boeing still needs to innovate to survive.  The cockpit of the 787 shows some empathetic evolution. Improved ergonomics for the pilot and co-pilot, including luggage storage space and cupholders — are small indicators of the empathetic pressures percolating back to cockpit design.  There are likely other factors.  In long history, most of the pilots came from military backgrounds.  Now, they’re civilians, and likely have different expectations and norms.  I have no idea if the airlines ask pilots what plane they’d like to buy. But Boeing certainly does as they design aircraft.  Improved situational awareness improves performance — an issue we’ve covered in the past.

Education faces large pressures for evolution as well.  It’s no surprise that Mike and I share similar perspectives, even though we come from separate worlds.  Though his roots are in the world of commercial aerospace, and I’ve been a university educator, we’re both interested in performance-based learning.  Companies like Boeing, regardless of their social structure, don’t care much about things like grades.  They want their employees to acquire new skills that they can use to make money.  One of the things that definitely drove me, when I started the Industrial Design Clinic, was guilt over taking money and not providing value.  So I modified what I did to create goal-based behavior in my students — which really came down to justifying the value proposition.  There’s no question. Money is a great coherence generator.  And guilt? Performance/Goal-Based behavior requires a reflective attitude towards one’s performance.  Maybe the two aren’t that far separated after all!

Can we learn anything about how to evolve historic power structures and hierarchies from all this?  One lesson that comes out of Boeing AerosPACE is that a great place to start, when it comes to information flow, is to establish peer-to-peer empathetic links across organizations.  In AerosPACE, those peer-to-peer links were primarily in the student teams assembled virtually across the different universities.  There was still a professorial emphasis on named (externally defined) roles, and various technical leads (aerodynamics, weights and balances, controls, and such.)  But because the students, in the end, wanted the plane to fly, they had to develop their own relationships in exchanging the necessary information to get the UAV off the ground.

Similar dynamics happened with the organizers.  Professors, through academic culture, tend to maintain ‘collegial’ relationships with other professors from other universities that share the same discipline.  This was stretched even further by the need to extend relational status to the corporate class that was sponsoring the work, and even listening to each other and modifying curriculum and ways-of-being.  Some of this was to improve performance, and some of it was to keep a positive work culture.  But it still worked well.

And most of the social dislocation was barely noticeable.  Student teams in AerosPACE were composed of selected numbers of students from different institutions, forced to work together virtually.  Faculty advisors were only one per group.  What did that mean?  If there was a problem with a student from another institution, that student was responsible to their faculty advisor — not the more accessible faculty member from their home institution.  Classical in-group/out-group dynamics between institutions were dismantled, by using academic culture and collegiality to promote empathy development, and more of a case-by-case basis of handling student issues.

While touring the 787 line, Mike remarked “these planes have really moved past the point where any of us have a complete handle on everything in the airplane.  They are the product of a collective.”  And he’s right.  It’s easy to be impressed standing next to a 787 — as someone whose experiences with planes are mostly confined to the interior, and walking through a skyway, it’s easy to forget how big these things are — and that they fly incomprehensible distances.  Standing down next to the landing gear, and looking up at the complex of cables, wires and actuators, it’s easy to see how this thing really is bigger than any one individual.  The plane is actually a large Information Commons, where the different disciplines intersect.  How they intersect is not in some futuristic bundle of merged parts.  In order for an airliner to be maintained, there has to be some separation between different subsystems like electrical components, hydraulic components, and structural components.  Without this, when something breaks, it turns into a spaghetti unraveling problem to figure out exactly where the problem is.

Because of this need for maintainability, creating an airliner as a meta-linear construction of knowledge, which flows naturally out of the Boeing social structure, makes sense.  Without self awareness that this is what you’re doing, it does constrain innovation.  For the next ten years, we’re likely still to fly on planes that are tubes with wings. But it’s also a way that Boeing maintains configuration control, and maintainability and fleet interoperability.

Connecting information specialists at the bottom of the social structure also makes sense.  And as we’ve discussed in the past, Boeing has a whole department dedicated to this, called Liaison (pronounced Lie- a-zon) Engineers. With a system as complex as a 787, there’s no way to get rid of unintended meta-nonlinear synergies.  The 787 Lithium-Ion battery fire issue is a great example of that. But for the most part, the information and design structure will conform to the more traditional, hierarchical social structure.

We can take the lesson from aircraft construction and use it for starting the process of disciplinary integration in engineering, or really any multi-disciplinary educational experience. Instead of mixing a bunch of professors together in a stew, and waiting for them to come up with a grand plan, it would be far more evolutionary to declare a goal-based scenario, like recovering a community after a hurricane, and asking how each discipline might like to participate with a lesson over the course of a weekend.  Such lessons might be building a bridge over a washed out section (civil engineering) to get to a health care clinic (pre-med students) while sharing information about the situation quickly (software engineering for mobile phones).

The next step might be to create an situation-awareness bulletin board, shared by all disciplines in managing the crisis.  This Information Commons, much like the airplane, would be accessible to all students participating, with both formal meetings between disciplinary leaders over the course of the scenario, and encouragement to students who are not designated leaders, to reach across compartments to other students with given tasks and specialties to fix their own part of the world.  Thus, Dr. Richey’s networked hierarchy is born.  Students would be prepped for the scenario by learning disciplinary skills, as well as having all students educated in negotiation and information sharing.  Using the concepts explored in the Neurobiology of Education post, the scenario provides an integrative, autobiographical experience that dramatically advances student learning and information retention, while making professors happy by ensuring their syllabus topics are covered.

And this kind of thing might not be that hard to pull off.  Anyone living adjacent to a college campus can testify the level of organizational complexity behind pulling off a successful Homecoming weekend.  Why not use the same principles for a scenario weekend for education?  Give the professors the sharply divided pie of information that they feel is important, and let our neuroplastically advantaged students do the synergies.  It’s a win-win.  Below is a figure that shows the concept.