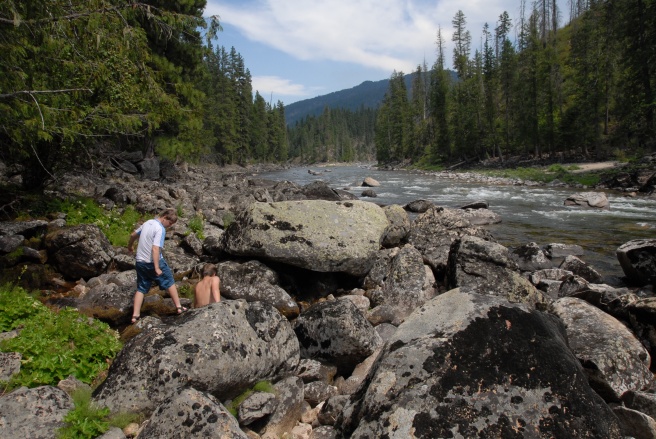 Braden and Conor, along the wild Selway River, 2012

One of the more intriguing videos I’ve watched in the last two years is a clip from empathy pioneer Franz de Waal’s research with capuchin monkeys.  In this experiment, de Waal is asking a basic question: do capuchin monkeys have an inherent, and an implied genetic mechanism for fairness and morality?  De Waal’s position has been, as long as I’ve read his stuff, that the differences between humans and animals aren’t nearly as great as most people would like to think.  But he starts with the widely accepted premise that humans ARE indeed different, and then constructs experiments around the popular theses (such as can certain animals recognize their reflection in the mirror) in order to prove or disprove these.

It’s a Legalistic/Absolutistic v-Meme hierarchical premise, which would be expected inside typical university, composed of low-empathy rigid hierarchies with lots of rules.  De Waal asks questions that make sense to that community, which then map to the mental models that people have regarding the In-Group (humans)/ Out-Group (animals) dynamics between the two. Though many might consider the work paradigm-shifting, de Waal’s questions are incrementalist, but still important.  De Waal’s goal is establishing without a doubt that a certain differences, previously postulated to exist, between humans and a species like De Waal’s capuchins, actually don’t.  So while he’s not completely flipping the paradigm — more nibbling away at the mental model that animals and people are different– he’s also maintained a distinguished career and international respect.  Something that I’m still working on!  🙂

Below is the clip from De Waal’s TED talk on the inherent sense of fairness ingrained in capuchin monkeys.  It’s short, and I highly encourage you to watch it.  The basic premise is that you have two monkeys in two cages.  Each monkey is asked to perform the same task — fetch a rock and give it to the keeper — and then in turn is rewarded for their efforts.  Chaos breaks out when one monkey is given a piece of cucumber, while for the same task, another monkey is given a grape.

The whole TED talk is below, and also well worth the watch.  De Waal shows a few other tests, as well as talking about his concept of the Pillars of Morality — Reciprocity and Fairness, and Empathy and Compassion.  De Waal ends the talk saying that many in the intellectual community don’t like this result, including philosophers and anthropologists, and insist that fairness is actually a much higher level concept.  One philosopher , according to De Waal, told him that fairness was not even discovered until the French Revolution!

All of this — the issue of animals and inherent morality — is interesting in and of itself.  But for those of us who believe in theories of collective sentience and empathy, there are larger lessons.  The first step is to understand de Waal himself, and his surrogates, as  social actors inside a legalistic hierarchy, asking questions of morality and fairness, that map exactly into the Legalistic/Absolutistic v-Meme that he exists in.  He’s not just an observer.  He’s a participant.

His experiments also reflect techniques fundamental to the dichotomous thinking of the dominant v-Meme — two monkeys are present, with an ostensibly neutral observer.  Even his experiments on elephants that are contained in the longer video match up only have two representatives.  Not surprisingly, de Waal’s emphasis on empathy is on the emotional content aspect, as discussed earlier, that also correlates with the lower v-Memes. And as we would also expect, he only giving a nod to the concept of cognitive empathy, which we fold together into rational empathy.  Measuring rational empathy in monkeys would be very difficult — and since you can’t measure it, you don’t run experiments on it and maintain fidelity to your v-Meme.  You can’t just debrief the subjects after a test.

De Waal’s system diagram — the way he perceives the grape/cucumber experiment — is shown below.  He places his lab assistant outside the system, rewarding cucumbers and grapes to the monkeys, once again reasserting the role of the scientist as neutral observer, non-empathetic and outside the system of interest, as opposed to interacting with the system whether they like it or not.  This is, of course, how the Legalistic/Absolutistic v-Meme views itself — removed, and only interacting as it chooses, in the timescales and spatial scales that it sets.  It’s following rules — and in control. Those monkeys are in cages, pal.

There is little or no consequential thinking exhibited by anyone in the system.  Does performing this experiment damage the monkeys’ socialization in the group?  De Waal mentions that two monkeys were pulled from the same social cluster.  Yet we have no information if de Waal and his cohort had a larger discussion — something like “we better be careful, pissing off those goddamned monkeys.  They might start beating the hell out of each other if we do this too many times.”  And interestingly enough, he also talks in the longer video about chimpanzees in similar experiments who would not take the better reward in front of a friend.  The chimp was displaying larger scale consequential thinking than displayed by the experimenters!

The point of this is NOT to judge de Waal, or his experimental set-up.  Though a discussion of higher morality might be entertaining to some of my animal rights readers, that’s not the focus of this thought experiment.  Instead, let’s see what happens when we consider a different system boundary, and what the consequences of collective sentience might be if we take the same experiment, but broaden our perspective.

Here’s a new plot, with the experimental executor inside the system boundary.

Experimental Executor is now part of the experiment

It’s the same exact situation as the reality portrayed in the video — but now our perception is different.  Now the Experimental Executor (E.E.) is engaged in an interaction with both monkeys, who are now part of a far more complex system, and playing a role as a relational disruptor between the two monkeys.  By placing the Experimental Executor inside the In Group, we uncover new dynamics.  First, the task — grabbing a rock and handing it to the E.E. — has to appear arbitrary to the monkey.  All the E.E. does is take the rock and dole out a piece of cucumber or a grape. This makes the monkey on the left extremely pissed off.  He starts banging his fist on the ground through the hole in the cage, and shakes the plexiglass.  Clearly, if he could, he’d at least pull the E.E.’s hair in retaliation for the mistreatment.  But he can’t get at the E.E.  The deprived monkey becomes more frustrated by the moment.

The lucky monkey on the right receiving the grape retreats from the commotion at the edge of his cage.  He’s not at all on getting involved with the scene on the right.  Once inside the system, by parceling out different energetic levels to people in identical situations, the E.E. is displaying anti-empathetic behavior inside the system.  It’s no longer neutral.  It has a deleterious effect, and all the monkeys know it — including, perhaps, the big monkey handing out the grape and cucumber!

Now we can start to see the effect of external relational definition inside this system.  The E.E. obviously has talked to her supervisor — Franz de Waal — outside the system, and agreed to do the experiment.  Maybe she is fundamentally empathetic to the monkeys — she doesn’t like it when the monkeys get pissed off.  She could have a self interest in this — maybe she has to go inside the cage with the monkeys later, and she knows they’ll throw poop at her.  But the entity on the outside of the system — that would be Franz de Waal himself! — is now the person doling out metaphorical cucumbers and grapes to the E.E.!

This is not intended as a topical condemnation of de Waal.  I am sure he obviously believes in his work, and is carefully constructing experiments that show the deep flaw in human thinking regarding placing animals in an out-group from a point of moral reasoning.  In that larger temporal/spatial sense, de Waal, by attempting to change ingrained mental models that consider monkeys lower forms of life, and subject to whatever whim humans decide to put them through,could be  practicing a ‘meta-morality’ — which would then be a function of more highly evolved, self-aware, 2nd Tier legalism.  The thesis might be:  “see, monkeys and humans both get connected living, so stop saying it’s OK to do things to monkeys, because they’re really just like us in our In Group.”  Even though there’s this limited consistency in the experiment — because the experiment is tormenting both monkeys.

We can also see how this whole system opens itself to the anti-empathetic.  If the lab tech. displays too much agency (and empathy!) in running the experiment, de Waal then has to assert his authority and find a different experimenter if she won’t do what he asks.  He’s doling out grapes and cucumbers as well — because maybe the E.E., just like the monkeys, on a meta-level, doesn’t have the timescales or levels of consequential thinking to appreciate de Waal’s lofty goals.  Maybe she’s worried about her roommate, who thinks working with monkeys kept in cages is just wrong.  We don’t know, as this is outside the system boundary.

But, of course, de Waal himself is inside a system — and he has to respond to the people on the outside, who view him as someone that receives cucumbers or grapes.  That might be the National Science Foundation, who funds his research.  He’s got his own set of seemingly arbitrary reviewers who are asking him to give them a figurative rock from inside his cage!  Anyone who’s sat on an NSF review panel, or have had proposals reviewed by NSF, knows how this works.  De Waal himself is a meta-monkey, along a whole bunch of other monkeys in cages, all getting money (energy) either doled out to them, or punishment dished on them.  The system replicates itself in a self-similar fashion down to the smallest scales.  Which is not surprising, considering what we know about our larger Theory of Empathetic Evolution.  It’s a low empathy system, and those in it should expect to be faced with many dichotomous choices, including some that will inherently cause relational disruption.

Poor Franz de Waal, trapped inside his own cage — a low empathy system constructed by NSF!

What can we learn from this cascade of experiments, ending up with de Waal’s capuchins squabbling in cages?  Perhaps the largest lesson is how Legalistic Hierarchies still provide relational fragmentation as part of their core functionality, through dichotomous choices. And through intrinsic mechanisms, open the door for some level of relational disruption, necessary for maintaining the hierarchy.  Imagine what those capuchins might do if they all got together as a group.  Or those grad students!

3 thoughts on “Relational Disruption and Sentience — What Can a Bunch of Monkeys Teach Us About System Science?”