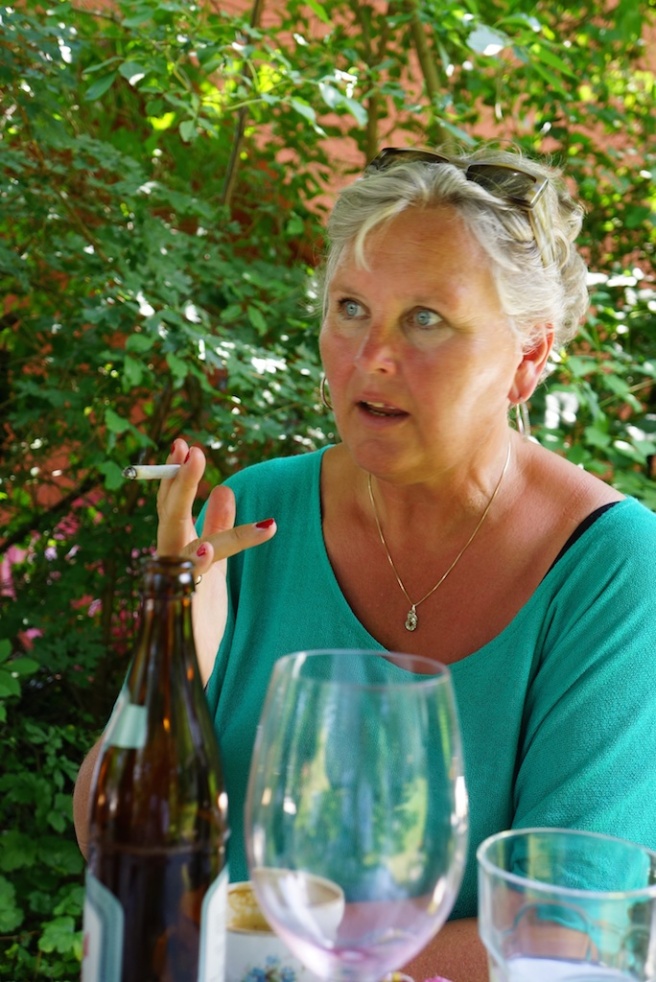 Anneliese, at the Garden House in the 13th District of Vienna.  Viennese know how to really play the Beer Game!

One of the interesting examples at the beginning of Peter Senge’s book, The Fifth Discipline, that’s intended to demonstrate the power of systems thinking, is a game called the Beer Game.  Invented at MIT in the ’60s, Senge uses this in his classes to teach supply chain dynamics.

The basic outline goes like this: In the game, there are three parties ostensibly working together to sell beer:  a retailer, a wholesaler, and a marketing director for a brewery.  The beer in question, ‘Lover’s Beer’ is distributed throughout a network of convenience stores, and the primary mode of communication is a check-mark sheet of how many cases a retailer wants to order on a weekly basis.  Every week, a truck driver brings beer to the retailer, and every week, the retailer hands the order sheet to the truck driver.  The truck driver then aggregates those sheets through the wholesaler, which then goes back to the brewery.

Simple. An exception is inserted into the game that increases demand.  Turns out, a music video is released by a young rock band, and demand starts to climb.  The cascade of circumstances with retailers starting to order more beer, and wholesalers demanding more leads to consternation and increased production at the brewery.  The end game is that because there is a lag in the actual production of beer — it takes two weeks, at least, to brew, there is overshoot.  The effect of the video wears off, and demand levels off back at the standard, pre-video level.  All three players end up with extra stock that they can’t get rid of, and everyone is unhappy.

Senge makes very clear in his book that everyone playing is NOT allowed to talk to each other — they have an externally defined relationship with each other, and that’s that.  No one has time for anything else — classic power structure/hierarchical behavior.  The only communication that comes is simplex-type information sheets that show aggregate beer orders in one direction (from customer to brewery/wholesaler), and then, of course, the actual beer in another (from brewery/wholesaler to the customer.)  Senge, though likely not an Authoritarian himself,  is no stranger to Authoritarian v-Meme systems — he prescribes no conversation, overwork, and the vast availability inside a given convenience store as part of the game.  Fragmentation, fragmentation, fragmentation.

But what becomes fascinating is how he ends the game, which at some level is a plea for changing what engineers would know as an open-loop system (no corrective feedback possible) to a closed loop feedback system — a very algorithmic approach, where some control signal is ‘fed back’ either upstream or downstream to modulate the oversupply production.  He has the retailer and the marketing manager at the brewery sit down and have a conversation — right before, in the story, the marketing manager resigns for the overproduction of beer.

What’s even more fascinating is that Senge’s role-play of the marketing manager has the marketing manager quit to save his reputation — a status-based, lower v-Meme behavior if there ever was one.  Instead of arguing that this marketing manager has been through this boom-and-bust cycle once now (he was hired at the start of the game!) and now is Wise After the Event, the guy is canned.  What he’s doing, of course, is expressing how Senge views the world — he, like all of us, can never escape the dominant v-Memes that we have inside of our head — in this case, like the book, a plea for a combination of Legalistic v-Meme thinking coupled with a Performance/Goal-Based v-Meme evolution.

And then Senge gives us the answer, which is, not surprisingly, systems thinking.  Absolutely nothing wrong with that, at least on a superficial level.  If all three parties understood the interrelationships algorithmically in their supply chain, then these things wouldn’t happen.  We can plunk down modified versions of these forms, or set up some model for understanding slow-down and expansion of system boundaries, and we can eliminate these types of problems.  Senge alludes strongly to communication.  But don’t they already have communication?  The forms with check boxes?  Senge in his own solutions, is v-Meme limited.  And without a larger self-awareness, he can’t see where he might go.

Looking at things from a more global v-Meme perspective, Senge is arguing — rightfully so, in a limited way — that if we had just a little movement from pure, arbitrary, impulsive authoritarianism, to a generalized understanding of the algorithmic laws that govern system behavior, we could dramatically improve system performance.  We would start to see the development of the idea of consequential thought among the actors.  And with increasingly sophisticated understandings of system dynamics, we could develop an increasingly sophisticated predictive model of how to buffer what systems modelers call perturbations to the stability of the system.

But let’s reframe this debate, inserting the empathetic development of independently generated, data-driven, trust-based relationships into the mix.  Instead of title-driven relationships, where we have a retailer, we have Sue, the owner of the convenience store.  Instead of a truck driver, we have Mike.  And instead of a marketing director, we have Pierre. Mike is dropping off beer at Sue’s store.  It’s a small store, and anyone rolling in is immediately noticed — especially someone unloading beer.

“What’s up, Mike?” Sue asks.  “Anyone around selling more beer than usual?  Any promotions, or specials from the head shack?” “Nothing this week, Sue,” he replies.  “Anything unusual on your end?” “Well, I’ve been selling out quicker from this beer — Lover’s Beer.  Kinda weird — it’s not that good,” Sue replies. “I don’t like it,” Mike says.  “But kids nowadays…I’ll see if I can get some more of that.” “Sounds good,” Sue says. Mike goes back to the distributor, and passes the information on about things he’s seen on the route.  A couple of weeks pass, with the same pattern of beer lag that is seen in the original game.  Mike returns to Sue’s store. Sue says “Mike!  I’m selling out of that beer!  Gotta have some more of it, and you’re not bringing any more.  Here’s another order!” And then Mike demonstrates the power of empathetic connection, and the elevation of responsibility that comes when people are connected.  “You know, Sue, I know you want some more.  Seems like they’re backed up at the brewery.  But I’ve been driving a beer truck for a long time, and the last thing I want to do is show up with 40 cases of that crummy stuff and you not be able to sell it.  I’m gonna sit on your order until we can at least fill your backlog.”

One can easily imagine the ripple effects that come with similar dialogues between the truck driver, his other customers, his boss, and Pierre, the marketing manager.  Pierre’s job is to pay attention to who’s out in front of his product placement efforts.  He’s likely seen the video, or heard about it, especially if he’s developed empathetic relationships himself across his network.  If everyone is a sensor on his network, and engaged in duplex, empathetic communication, the aggregate intelligence regarding the extent of the perturbation is quickly known.  The system itself — profoundly dependent on empathy and empathetic relationships — doesn’t have to fix itself to some arbitrary time constant in the system — like the week between ordering, or the two weeks necessary to brew more beer.

Independent relationships can transcend these externalities, and with that changing time scale, adjust themselves to deal appropriately with the effect of the release of a music video.  The entire knowledge structure becomes much more rich, with a much better definition of metacognitive unknowns, like “we just don’t understand much about young kids today!” This is, of course, what I believe Senge, had he had the concept of the dichotomy of relationships, would say.  What is created with just a little empathetic, duplex communication, and a good dollop of independent relational generation, is a far greater, more sophisticated and robust learning organization than one that just learns algorithmic modes of prediction.

Ordinary folks might just call it friendships, or common sense.  But one can see that those labels are misleading.  The actual sophistication embedded in the system, and emergent in times of change, with rapidly changing time scales, is actually a mechanism for maintaining information coherence across all affected parties.  And I’d argue is a much happier solution to the Beer Game than just a fragmented network of titles.

If you think that this example only applies to small-scale situations like beer at a brewery, the whole Boeing 787 supply integration chain is filled with similar stories.  Back in 2004, when Boeing was gearing up to design and manufacture their first composite airliner, the top management staked out Boeing’s new role as solely a systems integrator of parts around the world.  Boeing would sit in the middle, the airplane would be a virtual one first, with an entire digital model sitting out in cyberspace.  Companies from all over the world would be able to bid on whatever parts they thought they could manufacture, and then those parts would converge on the Everett, WA plant, and the new facility in Charleston, SC.

It all SOUNDS good (high status, accepted mental model), and system-y, until one starts to really unpack the reality of the scenario.  And then one starts to realize how deeply flawed and arbitrary the whole idea is. To start, the 787 Dreamliner has around 2.3 million parts.  With an Authoritarian v-Meme set, once the design is made, then parts must be right.  But anyone with just a lick of skepticism would realize that getting 2.3 million parts correctly designed and up on the web for bid is nigh on impossible.  There is no way, in an open loop format, that you could drive the error rate low enough that the plane could fly.  When you add on the issue then of a manufacturer making the parts, and having them all be correct, you can quickly see that the whole airplane would, sooner or later, run into a complexity crisis.

And it did.  From rivet availability to deburring the backs of rivet holes, errors that ended up having to be fixed far downstream in the process from where they originated kept cropping up and delaying first flight — for three years.  Even now, with the relocation of 787 construction to a non-unionized workforce in South Carolina (no Legalistic v-Meme scaffolding!) 787s are rolling off late and losing money — about $10M an airplane. Clearly, higher-level, empathetic emergent dynamics are necessary to create contemporary, high tech products.

In closing, I’ll tell you I was recently at a large American Society of Mechanical Engineers meeting in Montreal, Quebec.  Speaking were several industry leaders, who were, in various ways, addressing this complexity crisis.  When asked what was the source of most of their pressing problems, all said the same thing — “social”. It’s not just about beer.