One of my long-history hypotheses is that the Enlightenment was a direct result of the Black Plague.  Because of the Plague, and the massive depopulation that occurred — something like 45-50% of the population of Europe died, all from a couple of galleys landing in Genoa.  The Wikipedia article contains all the details for those fascinated by such things.

One thing that the Black Plague did, by depopulating areas by as much as 80%, though, was dismantle the vassal system across feudal Europe.  This made it possible for peasants to exercise agency regarding whom they wanted to work for, that then laid the ground for recognition of those peasants as people — which then accelerated the development of empathy, because of the need to look past someone’s title because you needed your arable land tended.  Which then led to Locke and other Enlightenment Philosophers, and the Rights of Man!

One can keep going with the larger empathetic historical arc.  So here we go!  This led to the ability for more people to be rational, as that rise in empathetic sea level drove more rationality, with the ability to exchange information, which then led to the ability to create more, and more complex machinery, which then led to the Industrial Revolution.  You get the picture.  No one can argue that history is one long, connected story.  And deeply embedded in it, sometimes in fits and starts, is increasing empathy.

And if you need what experimentalists call a ‘control’ — one can merely look across to China, along the same timeline.  Needham’s Dilemma asks the question “how did China technologically fall behind the West?”  The answer is a lack of empathy – big time.  When you have too many people, and the emperor is a God, well, that kind of Magical Authoritarianism is tough to shake.  Or give a culture much space to evolve.  Sophistication will undoubtedly increase — no one can argue with the beauty of Chinese artwork,  their architectural accomplishments or work in opera. But the value of the lives of ordinary people?  Eh, not so much.

One of the key drivers, as well as a valid indicator,  on a very basic, thermodynamic level, is the value of an individual’s wage.  The Black Death, through depopulation, increased wage rates through direct competition of the vassal overlords.  This enabled both the actual living standard to increase, through things like lower housing costs for everyone, as well as the relative living standard — the gap between rich and poor — to decrease.  With that combination recalibration, both absolute and relative, humanity was once again launched on a path of v-memetic evolution, leading to the Renaissance and the present day.

It was with this perspective that this article in Vox caught my eye.    Describing the work of a young Italian economist, Guido Alfani, it shows the long-history view of wealth inequality.  I’ve borrowed the figure from the article, and it’s posted below.  The chart shows the amount of wealth owned by the top 10%.  The breakpoints are the Black Plague and World War II. 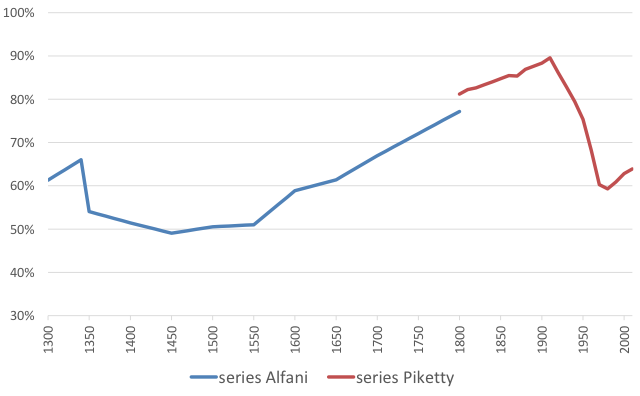 Why does the absolute ratio matter not as much?  Or why did it take a 90% differential to start World War II, where no one can argue that Authoritarianism reached its peak?  Societies make progress.  Overall wages and well-being continue to climb, and with them empathetic development.  Individual empathetic development then drives more empathetic cultures.  Which then creates more empathetic people.  That’s the Principle of Reinforcement stuff that we talked about a long time ago.  These systems are self-similar, in that larger forces develop individuals, which then create those larger forces, in a constant feedback loop.

Now that we’re considering things on a planetary scale, it’s really hard to wrap one’s head around the different energetic scalings that are occurring.  Oxfam just released a report that declares the top eight wealthiest people in the world have the same net worth as 50% of the rest of the world’s population.  1 billion people are already in poverty.  Needless to say, this kind of wealth aggregation Overview Effect wasn’t even possible 700 years ago.  Throw in the Internet, which allows more information going to more places and more people, with more perspectives, than ever before.  And finally, add a heaping dose of smart phones and cellular networks.  It’s basically impossible to come up with one number that is going to give the same clarity as far as percentage wealth distribution that trips the Empathetic Devolutionary cycle back down the Spiral, from Performance-based Communitarian v-Meme societies, back down towards the medieval authoritarianism that dominated before the Black Plague.

And all this ability to connect cuts both ways.  On the one hand, it gives alternate news sources the ability to spread fake news further and faster than ever before.  At the same time, it allows regrounding of informatic systems by far fewer individuals, or far smaller conflicts, than ever before.  Do note I am a huge Glenn Greenwald fan.

But just because we can’t nail down a number doesn’t mean we can’t see it.  Once we reach an overall system value of wealth differential, the system, with all its various cultural sidebars, and lower v-Meme scaffolding, starts displaying Empathetic Devolutionary behavior.  Sooner or later, we devalue the individual enough, through a combination of automation, overpopulation or tax policy, that gives the winners in the system an ability to trigger Pareto principle runaway wealth acquisition (here’s one for the real masochists in my news feed.)  And more and more fall further and further behind, while those in front sprint further and further ahead.  A division of energetics, as well as the actual baselines themselves are a key cause.  And in the end, empathetic culture alone can’t overcome this.  People have to eat, go to school, and talk to each other enough to keep their neural evolution alive.  And working multiple jobs in a fast food joint, or bolting together iPhones doesn’t seem to be conducive to any of this.

And the upshot is this: Authoritarianism comes home to roost.  People stop mattering.  And there’s enough disordered thinking out there that shows up.  You don’t have to look on the national scene, and Trump, which I’ve written about extensively.  In our own little community of Moscow, ID — known as a liberal bubble in a deep Red State– it’s this Idaho senator, recently elected, who advocates for a law requiring the death penalty for women getting abortions. It’s the lack of concern for the education lending bubble.  Everyone, no matter how powerless in a society, deserves what they get.  The winners, of course, also deserve all their money.  But they inherit no responsibility to the rest of society.

Here’s the cautionary tale for the various moral disputations to the system argument — that somehow, if we just do what’s “right”, that’s the best thing to do.  These things never end well for anyone.  In fact, they always end in some human version of the Great Dying.  And they are fixable, in this day and age, through tax policy.  From where I sit, there are certainly better and worse public investments.  Better bridges and trains mean more people can move freely through your society, and be happier.  Warplanes give the Authoritarians more modes for violence, and feed Survival v-Meme fears.  But in the end, making sure one has a system in place, even if it’s manufacturing Hello Kitty dolls, so that everyone has enough sustenance to go round, as well as take an occasional beach vacation, is really an optimal solution from an Empathetic Evolutionary perspective.  The alternatives in this day and age are terrifying.  Like this — more nuclear weapons modernization and acquisition.  How about that argument?

8 thoughts on “What Caused the Enlightenment? And What Threatens to Unravel It?”