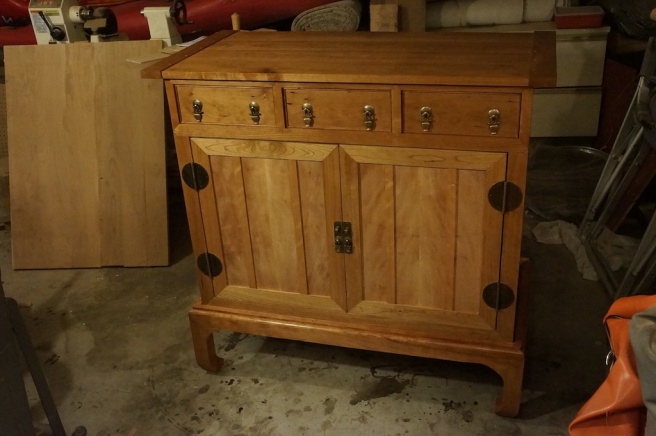 If you’re going to talk about design, it sure helps to experience it.  A Ming-style wine cabinet I finished last week.

A series of articles have flown across my desk in the last two weeks, most involved with the role of social connection and general health.  They’re written by academics, and what’s so stunning is that the core mechanism of social connection, without really any disagreement, is developed empathy.  The scientists describe the phenomenon, but can barely utter the word.  Though the results confirm basically all the principles I talk about on this blog, it’s still amazing to me that the various researchers have difficulty with the connection.  But when you’re reporting out knowledge from a social structure that is essentially undeveloped with respect to empathy, it should serve as no surprise.  That’s what my Theory of Everything predicts.  Which, while potentially rewarding to my own ego, is fundamentally daunting.  We’ve all got to get this change thing going on.

Here’s a great example, from the Harvard Gazette.  Titled “Good genes are nice, but joy is better” , you’d expect to read something about individual emotional states.  But instead, not surprisingly, the entire piece is about connected relationships and how they contribute to longevity.  Here’s a pull quote:

“Good relationships don’t just protect our bodies; they protect our brains,” said Waldinger in his TED talk. “And those good relationships, they don’t have to be smooth all the time. Some of our octogenarian couples could bicker with each other day in and day out, but as long as they felt that they could really count on the other when the going got tough, those arguments didn’t take a toll on their memories.”

I’m not going to get lost in the psycho-social weeds with this piece, but the headline also indicates the level of empathetic development of the author.  Instead of talking about empathy, talking about joy would be the expected perspective of someone from a v-Meme where emotional empathy was front and center.

This week, I also watched another video that I CAN’T FIND AGAIN!  (ARRRGGHHH!) about social connection and longevity.  It too, backed up many of the points from the Harvard study — that social connection was very important.  But the main point of the video was not just that close, familial relationships mattered.  It was actually a rich bed of peripheral social relationships, and casual connections made during the day that really determined longevity and overall individual happiness.  It’s easy enough to find the scholarly papers to support this — see this summary in Science Daily.  This piece makes the “connection as mental exercise” argument that I make regarding how empathy exercises the brain.  Here’s another review article from the NIH that backs up this point.

Why do I keep bringing this up?  In many ways, these pieces, by moving past the notion that it’s “family uber alles”, which is a lower v-Meme, Externally Defined Relationship pattern, shows that empathetic exercise is the key, and as long as you get it, it doesn’t matter WHERE you get it.  You need to be part of a larger collective.  And if you don’t have a big family that takes care of you, then you can make your own safety net.

One more piece discussing social capital research done by the folks at UC Berkeley show a much more evolved view of social connection than the piece from Harvard.  Here’s a pull quote from that piece:

Helping seniors to stay engaged with their community and to continue to make positive contributions, according to James, is invaluable.  The health benefits of volunteerism are well documented, including its impact on increasing longevity, he says—but it’s even more powerful when your efforts give you a sense of purpose in life.

“People who have the strongest sense of purpose are much less likely to become depressed, have neuroticism, or get Alzheimer’s,” says James.

Vonda feels the same way. Her community has plans to keep themselves connected socially and actively involved with each other’s welfare, while still maintaining ties to their surrounding community. They will have a central community space open to other groups to use, and will be inviting seniors to teach each other new skills—like gardening or blacksmithing—that are useful to farm living.

“We plan to have people doing real work, instead of being taken to the mall or asking them to engage in invented, frivolous time-occupiers,” says Vonda.

What’s so awesome about this is we can also see the self-empathy, Performance v-Meme development mode start to surface.  Learning genuine competence, and sharing it with others, is really a key to lifelong development.

Why does this matter for our larger future?  At the same time, the articles above were cascading through my information flow, this excellent piece came across my business feed — a critique of the establishment of Amazon Go.  Amazon Go is designed to eliminate the butcher, baker, and greengrocer from your life, while delivering to you with maximum efficiency the ostensibly algorithmically exact thing you think you need.  John Battelle lays it out exquisitely:

My first take on Amazon Go is this: F*cking A, do we really want eggplants and cuts of meat reduced to parameterized choices spit onto algorithmized shelves? Ick. I like the human confidence I get when a butcher considers a particular rib eye, then explains the best way to cook that one cut of meat. Sure, technology could probably deliver me a defensibly “better” steak, perhaps even one tailored to my preferences as expressed through reams of data collected through means I’ll probably never understand.

The non-empathetic, algorithmic Externally Defined Legalistic/Authoritarian v-Meme gives you the steak you think you want.  But empathetic interaction with the butcher that you’ve developed a trust-based relationship with will likely lead to higher performance as the relationship develops over time.  Grounded in your exchange of preferences, the butcher’s expertise, and the larger social capital generated, as friends in your network exchange their feelings about the total experience, it will also help you live longer.  Amazon Go may make your world, in the short term, seem like a more efficient use of your time.  But it totally discounts the metacognitive potential of talking to the butcher, and maybe hearing a suggestion for something else that’s in the meat case that’s on special, that may suit even better.  And Amazon Go completely eliminates the empathetic connection exercise your brain needs to stay alive.  You won’t even know what you don’t know.  It may be the perfect pork chop.  But part of you will still die inside.

When it comes to the last part, I actually have real experience to back this up.  When I lived in Vienna Austria for a year, and experienced the joy of shopping every day in the long, open-air markets where fresh fruits, vegetables, meat and bread are sold.  My German had always been mediocre — but my kids were at a cute age (7 and 9), and every day, we’d go to the market with our basket and shopped.  Of course, the first time we’d stop, no one would really talk to us.  But after the third visit, the vendors would want to know who we were.  They’d ask me about my sons, whose German was rapidly improving as they were in school there.  The kids started talking back, and before you know it, the market had turned from a place to buy a turkey leg to an hour and a half social experiment.

And what really drove the point home about the actual value of the experience was when I returned home, and one year later, got divorced.  I didn’t have my sons, and I didn’t have the market.  Instead of the enjoyable banter of the butcher and vegetable seller, I had the isolation of Walmart and the laser scanner.  I can still remember the profound loneliness of checking out plastic shrink-wrapped vegetables, and realizing the benefit of those small sips of empathetic water I had received from all my face-to-face interactions that were enshrined in everyday Viennese city life.  Empathetic droughts will do that to you.

Battelle’s piece is well worth the read.  With an awesome, well-contrasted argument, he makes the point about choosing empathetic evolution (your own personal developed heuristic with the butcher)  vs. increasing sophistication (some algorithmic, big-data analysis of your tastes provided by Amazon GO) in a gut-punch sort of way.  He even gets at the agency argument I talk about.

I’ll wrap up by saying that the research demonstrates clear pathways ahead toward fulfillment, as well as an ominous warning for those that will take it.  Our longevity research is really clear on how empathy, and its manifestation, social connection, matters for our health and well-being.  And it’s also clear that we get that well-being from a multiplicity of sources — not just one great partner, or your family.  We might start connecting the dots (as Battelle did) and realizing that a super-monopoly like Amazon, besides the unexplored-yet-obvious abilities to manipulate us by manipulating our primary information stream, by killing off the butcher, the baker, and the candlestick maker, is quite literally gonna kill us off.  And that will happen right at the end of our super-efficient, totally structured, lonely work life.  When The Man is done with us, well, stick a metaphorical fork in us — we’re done.  Now, if that doesn’t excite some Survival v-Meme neuroplasticity in you, I don’t know what will.

One thought on “Empathy, Longevity, and the Future of our Society”