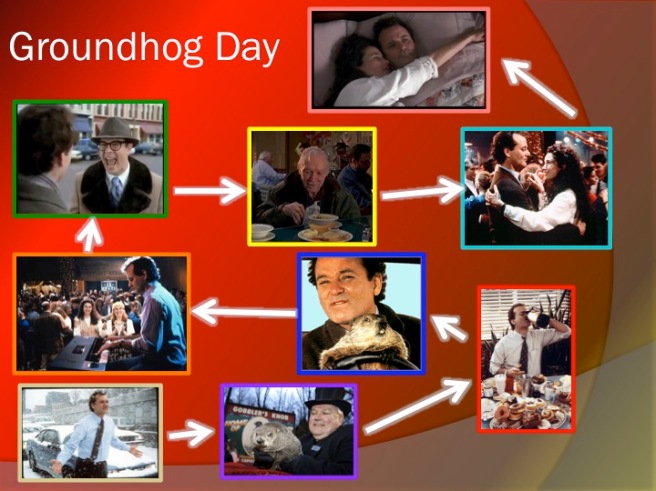 In the last post, we talked about one of the benefits of more highly evolved employees — a more profound, variable sense of time scales.  And then talked about the movie Groundhog Day, a classic as far as evolutionary enlightenment.  We ended with the question — how do you get individuals to evolve from externally defined, belief-based relationships to independently generated, data-driven, trust-based relationships?  How do we start the process of development of rational, and even global empathy?

If you want people to have independently generated, trust-based, data driven relationships with others, the first person they must have them with is themselves.  And in Groundhog Day, this is accurately portrayed.  The first thing Bill Murray’s character, Phil Conners, does to break the destructive rut he is in with his Legalism is learn to play the piano.  He goes on to learn French, ice carve, and a host of other things, for those that remember the movie.  But the first big step is at the keyboard.

What does this mean? Performance, mastery and appropriate calibration/grounding are the key things that develop one’s relationship with oneself.  When you make a mistake at the keyboard, the piano lets you know.  Either it sounds right, or not.  One can listen to recordings and determine if the piece is being played correctly — it makes sense to benchmark against other standards.  But the ivories don’t lie.

It is always an amazement to my students that their customers read their reports.  Instead of the usual glossing over that professors (or TAs) give the stack of reports, my customers give detailed feedback.  They complain if reports are TOO LONG.  It’s a shock to the system.  And it starts the process.

Back to Groundhog Day.  Phil Conners continues up the evolutionary ladder.  The next step is Communitarianism, and represented by his development of relationship between himself and the insurance salesman, his old high school comrade, Ned Ryerson.  At some level, that might be predictable.

But the next transition — to the Global Systemic/Second Tier Self Awareness is one of the most interesting in the movie.  As Phil becomes more empathetically connected with everyone in Punxatawny, he encounters an old, homeless man.  He  does the best he can to save him, over and over.  Yet the old man always dies.

What is being communicated here is the developmental stage of self separation and differentiation necessary for self awareness.  In order to become truly self aware, one must realize that one simply cannot project one’s persona onto someone else.  The movie does this with a stark contrast — Phil Conners lives on, and the old homeless man dies.  Yet at the same time, Phil learns the larger value of a complete, rational compassion.  He can only help the old man in his transition — and it is enough.

After this, the movie trips on up the next two levels — Phil is involved in a fractal temporal and spatial fashion with everyone in Punxsatawny (he always has to be in the same place, at the same time every day to catch the kid falling out of the tree.)   And at the final ball, with the potential, chronically unrequited love interest, his weather producer, Rita, played by Andie MacDowell, not only is he empathetically connected with everyone in Punxsatawny, he is also helping them.  This is a v-Meme that doesn’t show up on the prior Spiral chart —  known as Coral/Bodhisattva. In Mahayana Buddhism, a Bodhisattva is essentially someone who has stayed behind from ascending to Nirvana to help all sentient beings on their path.  It is only after getting to this point that Phil wakes up in bed, next to Rita, unconsummated, of course, with the clothes he is wearing from the night before.  The time cycle has been broken.  He is enlightened.

Since it is an American movie, of course, the lovely Rita wants to get married to Phil, and naturally he agrees.  When she asks him where he would like to live, he says “why not right here in Punxsatawny?”  If you’re enlightened, it doesn’t matter where you’re living.  But then after that, he says “but we’ll rent.”  He still has a capacity for self-discrimination.

The movie has many lessons for employee evolution, and is especially helpful for finding paths for meaning in work for all ages.  Though not everyone is at all the same, my observations of my students confirm the Performance/Goal-Based v-Meme development that happens between the ages of 19-26.  After that, I have found a steady cycle of clients looking for that Communitarian v-Meme transition around the age of 35.  What is interesting is that they often approach the university through athletics.  Football is, unsurprisingly, popular as a Communitarian gateway.  Everyone wants to be a member of the ‘Cougar Nation’ (our mascot is the Cougar.)  When the fascination with football wears a little thin, mechanical engineers often find me and the IDC as a way to contribute.

The next transition happens around the age of 52, often in the wake of a personal, mid-life crisis.  Facing one’s own death, regardless of prior v-Meme evolution, often causes personal epiphanies.  People in this age group are concerned about larger and longer legacies, and interestingly enough, are not as concerned with student projects and bottom lines.  I work with them to form meaningful relationships and structures, not just for completing projects, but also providing career and life advice.  In recent years, the IDC is also involved with several non-profit projects, and I have successfully utilized one colleague/friend to develop low-cost prosthetics as well as UAV systems for conservation.

Nothing is written, empathetic-development-wise, however.  People often get stuck.  Not everyone will become an enlightened master or employee.  But by increasing one’s own awareness as a leader, one can help both the individual and the company you work for along the way.