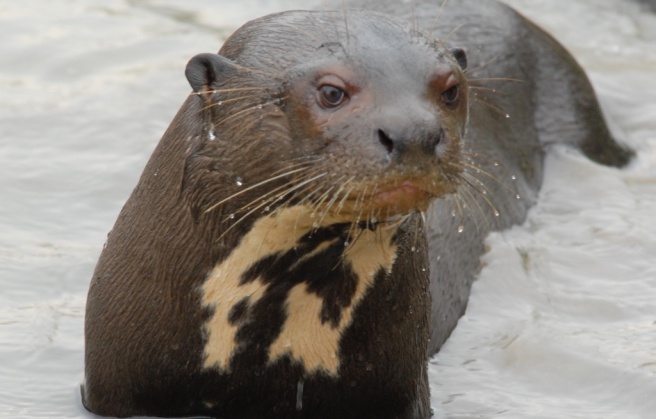 One of my favorite social theories is Everett Rogers’ Theory of Diffusion of Innovations.  Splitting up categories of innovation adopters along a Gaussian curve, it breaks out individuals into five categories — Innovators/Pioneers, Early Adopters, Early Majority, Late Majority, and Laggards.  Wikipedia’s post on the theory is a great place to start, for those unfamiliar.  Most of the information discussed below comes from that page.  Rogers wrote his book on the theory and was published in 1962.  The theory itself is extremely innovative, integrating 508 studies from areas as diverse as anthropology, rural sociology, education and medical sociology.  And it has been used across multiple disciplines as well, including organizational studies and complexity management. 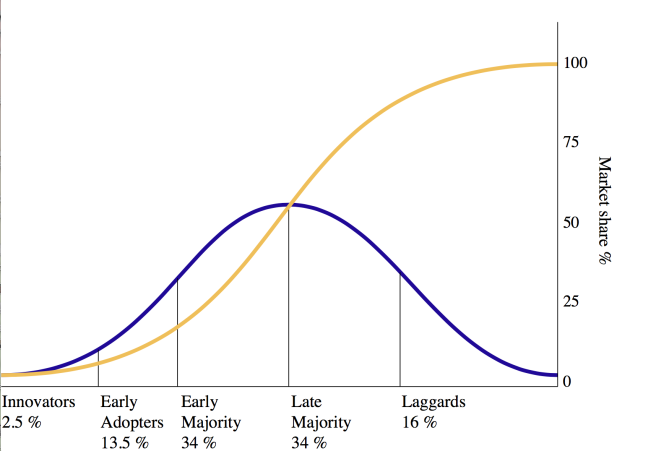 Rogers’ posited a five step process for adoption of an innovation.  Once again, direct from the Wikipedia post, these are:

Rogers’ work is seminal, and has stood the test of time.  Originally published in 1962, it has been re-published and updated as recently as 2003, and is still in heavy use today.  However, it is not without its Legalistic/Absolutistic problems.  Some of it, such as the concept of individual choice in adoption, has been looked at empirically, with little agreement.  Individuals choose to adopt for a variety of reasons, none consistent on the topical level.  Those followers of this blog should not be surprised.  The surface level lens almost always fails in broad studies, because many people may state the same reason for a given tech. adoption, but may be motivated for underlying causes that are not captured in a surface level analysis.

So you know what that means — let’s apply our Theory of Empathetic Evolution to the various actors in Rogers Theory and see if that helps!  What comes out is a portrait of social organizations and their dynamics for innovation.  Quelle surprise!

Pioneers in any technology have to have, at some level, a core level of egocentricism in order to buck the tide.  Personal fascination, status-seeking and such are all part of someone’s v-Meme make-up when they buy the first electric car on the block, or whatever electronic gadget is newly extant.  There often isn’t any real data on a given product, though there is hype that can be generated in pioneering communities.

What does that mean from a perspective of empathetic evolution?  There’s gotta be some limbic/impulsive core to the Pioneer.  But interestingly enough, there’s likely a fair amount of diverse empathetic development.  Pioneering communities increasingly spring up on the web, where gender and ethnic/racial profiles don’t matter.  It’s fragmented information that’s feeding the beast.  Plus, what’s really interesting is that metacognition and experimentation have to be core values.  People in pioneering communities have to be comfortable with knowing what they don’t know, as well as being aware there are going to be unknown unknowns out there.  Pioneers also, by definition, are not going to be playing Follow the Leader.  So that also gives credence to the notion of some extended empathetic development.  Relationships have to be based on cross-connection around a product or goal.  I’m going to guess that there’s some pretty strong Authoritarian/Performance-based coupling going on. Not much Legalism, though — a Pioneer is likely to be a rule-breaker.

Early adopters are people with developed metacognitive abilities — knowing what they don’t know — and are likely more data driven than the Pioneers.  They’re the ones scanning the various trade publications and magazines like Wired, looking for what’s new and what the beta is.  I’m going to guess that this involves a lot more data-driven thinking, and places Early Adopters in the Performance-based Communitarian v-Memes.  Empathetic development also means sharing across networks, and duplex information exchange, as choices are likely being made between performance profiles.  There’s also likely to be some mirroring behavior, and I’ll bet that Early Adopters, while being opinion leaders themselves as Rogers noted, are also heavily influenced by more specialized thought leaders.  That means seeking out more data-driven relationships and respect, once again, as often the Pioneers/Innovators are not going to necessarily be famous.

All the things about Early Adopters, but likely with a more Communitarian v-Meme bent.  Early Majority thinkers are less likely to be as comfortable with metacognitive guessing, and while being aware of their position and the need for change, are less likely to take risks.  I’m guessing that Early Majority are likely a little less data-driven (though that plays an important role) and a little more hierarchical in their thinking.  When someone important who’s a thought leader stands up and says it’s time to change, they jump.

Late Majority participants are definitely less comfortable with metacognitive stretch. They’re the ones likely to dismiss any change as a fad.  By the time the Late Majority gets involved, data has now started getting aggregated into belief.  The information on change is everywhere, and likely requires little empathetic exchange to come to a decision.  As such, Late Majority organizations are likely responding to Legalistic/Absolutistic change (such as new regulations), consist of hierarchies and power structures, and are sliding down the empathetic scale.

Laggards are everything the Late Majority is, but in spades — belief-based thinkers, who are surprised by performance demands and changes in the regulatory environment.  Change happens to them — it is not something they welcome.  New regulatory environments are something they fight — not look as a method for driving product change and performance.  The millennial change fight over Combined Average Fuel Economy standards are a great example. How did that, in the end, help the U.S. auto industry?

As stated in the Wikipedia article, Laggards also have an aversion to change agents — something that really smacks of Authoritarian thinking, and the metacognitive shrink wrapping that happens in these types of organizations.  Not knowing is a downer to personal status, and that means two things:  a collapse of knowledge to organizational borders, as well as a connected collapse in awareness.  If you need an example of this, one need look no further than the contemporary university.  When one considers the fact that the dominant social structure in universities today is rampant authoritarianism, with a collapse in shared governance, it’s no wonder universities fall further and further behind the needs of contemporary society.  A triple whammy of a non-empathetic social structure, coupled with a lack of more profound societal grounding (aka the Ivory Tower effect) and declining budgets (decreased energetics) does not bode well.

It’s worth the time to read through the Wikipedia/Rogers definitions written below and see how they support the v-Meme analysis above.

What’s the takeaway from all this?  The first is that if you want an environment for innovation, you have to have an environment where Innovators and Early Adopters are comfortable and feel safe.  That means fewer titles, less status-based thinking, and an empathetic corporate/institutional culture. Books like more traditional texts like Arthur’s The Nature of Technology — What It Is and How It Evolves support this same premise at a more superficial level as well, with theories that new tech primarily comes out of combinations of old tech.  If that’s true, then the more diverse ideas one has on the table, the more potential combinations.  And then popping down to the deeper level of the Theory of Empathetic Connection, how people connect and what their social structure is Innovation Diffusion destiny.  The more populated your social structure is with Pioneers and Early Adopters, the more likely they can connect and create the innovations your institution needs to survive.

Takeaway:  Rogers’ Theory of Diffusion of Innovation dovetails perfectly with what we’ve been writing about on this blog as far as creating innovation environments.  The addition from our Theory of Empathetic Evolution is the need to emphasize empathy and duplex communications if you want to stay on the Early Adopter part of the curve.  The other big takeaway is to not attack your change agents.  They’re the ones scouting what’s coming next.  And in a world where ‘Next’ is always coming, you need them if you don’t want to end up in the Survival v-Meme.