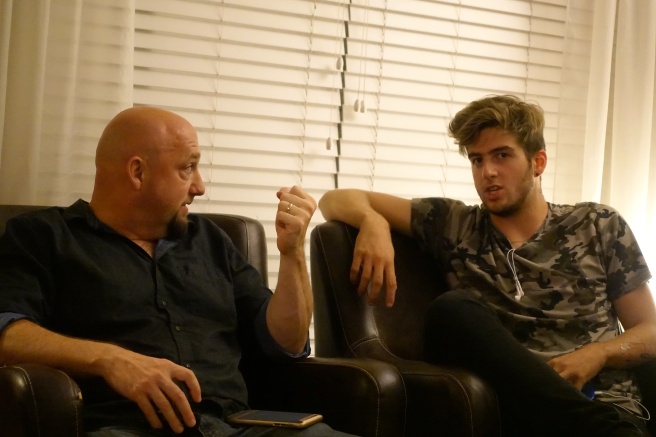 The older intellectual — and the younger one.  They might have been talking about Nietzsche.  Or Rajasthani taxi cab drivers.  Sept. 2018

In the process of discussing Microsoft’s stack ranking system, that certainly led to massive productivity loss at Microsoft, and maybe even to the collapse of several market dominance technologies, my co-conspirator Ryan Martens sent me the picture below, from Tomasz Tunguz’ blog 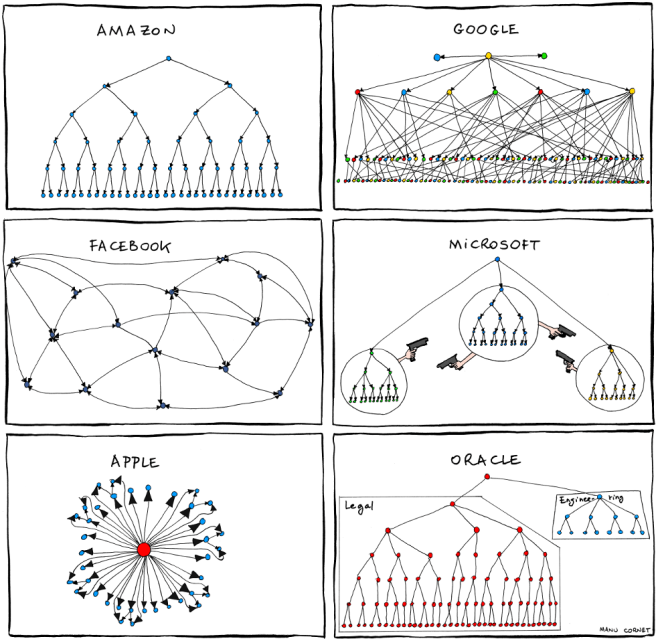 tagged to an article about Conway’s Law that so much of my work is constructed around. Tomasz’ interpretation of Conway’s Law is considerably less nuanced than my own, and not as well-developed.  Still, I learned a couple of things, most notably that the Harvard Business Review turned down Melvin Conway’s attempt to publish his theory in 1967.  Conway went on to get his Ph.D. from my B.S. alma mater, Case Western Reserve University.

Tunguz’ org. charts for product development are, as followers of this blog know, incomplete, because they don’t account for:

b.) the information coherence embodied by those little arrows – how much are people paying attention on either side of any given node to what is being said, and how are their v-Memes interpreting this?

c.) the flexibility of re-direction — how much does the org. chart discriminate from people going outside the org. chart to form their own relationships?

Every organization has an org. chart that kinda looks like one of the above (I love the Microsoft one with the little guns!) that is produced by the C-suite.  But every organization also has an actual org. chart, that will dictate the real structure of product design.  Such real org. charts are also time-dependent.  There may be a time when everything in a smallish organization may get reviewed by, say, a master mechanical designer for conformance, as well as an overview of unnoticed synergies, and that doesn’t show up on ‘who reports to whom.’  The expanded version of Conway’s Law we talk about is really a thing, and a fundamental law of the universe.

I did love (well, maybe found stimulating) the fact that the HBR turned down Conway’s paper.  It really helps my argument that lower v-Meme publications, no matter how sophisticated, are gonna shoot down more evolved thinking with regularity.

On another note, Tomasz is obviously an ‘ahead of the curve’ thinker, and I’m going to recommend reading his blog.  He’s also a venture capitalist, and an author himself.  His latest book is Winning with Data: Transform Your Culture, Empower Your People, and Shape the Future (Wiley). Might have to pick it up and give it a look.  I’ve also written Tomasz and will see if he writes back.  He’s got questions.  We’ve got answers.

Oh — and if you need a Sunday Reading, I highly recommend the obvious short post referenced in this blog, as well as the Vanity Fair article at the beginning of this piece.  This whole notion of competition uber alles as the path to success is effectively destroyed in this excellent piece.  Jack Welch’s (former CEO of General Electric) philosophies, that are really the roots of all this, carried to extreme have really wrecked American business, and created the mess with shareholder capitalism that’s currently destroying our country.

And you might review this as well on the Intermediate Corollary, which puts that Knowledge thing in the middle of Social and Design structure.  Not having an independent article on the Intermediate Corollary is a deep flaw of the blog.  I think I’ve written about it a ton in all my academic papers (that no one reads, BTW) that I’d forgotten about being more explicit here, where people actually come.  As of this writing, I’m up to about 33K views…